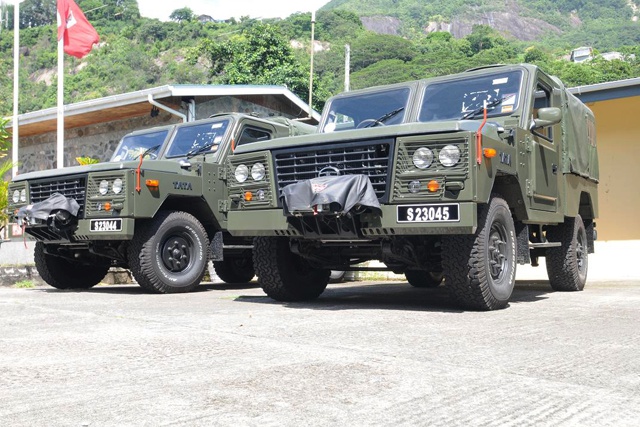 The outgoing Indian High Commissioner to Seychelles, Thanglura Darlong, presented the keys of the two Land Rover type “Tata four-wheel drives” to the Chief of the Seychelles Defence Forces, Brigadier Leopold Payet in a ceremony at the SPDF headquarters at Bel Eau yesterday morning.

The Seychelles Foreign Affairs Minister Jean Paul Adam was given the honour of officially starting the vehicles.

The vehicles have been built to the latest military standards and designed to transport troops.

“….the vehicles will be of good use to the SPDF as they are well adapted to the local terrain,” said Payet.

Darlong described the donation as testimony of the friendship and cooperation which exists between two countries, including in the areas of defense and security.

Each year a number of Seychellois soldiers are sent to for training at various Military Academies in New Delhi.

Still as part of cooperation in the military field, last year the Indian government donated a Dornier 228 Maritime Reconnaissance aircraft to the Seychelles Defence Forces.