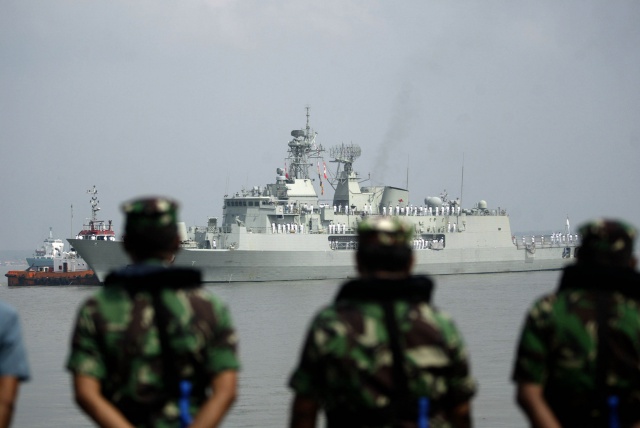 (AFP) - Indonesia has suspended military cooperation with Australia after training materials deemed offensive were found at an Australian army centre, officials said Wednesday, in a fresh flare-up of tensions between the neighbours.

Cooperation including joint exercises and education and exchange programmes were put on hold last month after an Indonesian officer raised concerns about the materials at an Australian army language training facility, officials from both countries said.

It was unclear what exactly in the materials had caused offence.

"Military cooperation with Australian forces has been suspended temporarily due to technical matters," Indonesian military spokesman Wuryanto told AFP, but added that he hoped the problem would "be resolved soon".

It was just the latest row between the key allies, whose relationship has been beset in recent years by disputes over Jakarta's execution of Australian drug smugglers and Canberra's hardline policy of turning migrant boats back to Indonesia.

Australian Defence Minister Marise Payne confirmed the suspension, saying in a statement: "Some interaction between the two defence organisations has been postponed until the matter is resolved."

She said it related to "some teaching materials and remarks" at the language training centre, without giving further details.

Indonesian newspaper Kompas said the row erupted after an instructor from Indonesia's special forces found training materials he thought were disrespectful towards his country's armed forces during an exchange program.

The instructor also came across other materials he deemed insulting to "Pancasila", a set of principles that are the philosophical foundation of the Indonesian state, the paper reported. The report did not say what the materials consisted of.

The Australian Broadcasting Corporation reported that the Indonesian special forces, Kopassus, train with Australian forces at a base in Perth, western Australia.

Payne said that the chief of the Australian Defence Force, Air Chief Marshal Mark Binskin, wrote to his Indonesian counterpart, General Gatot Nurmantyo, vowing that the matter would be addressed.

But Indonesia decided to push ahead with the suspension last month, said Wuryanto, who like many Indonesians goes by one name.

Payne said an investigation was ongoing and pledged: "We will work with Indonesia to restore full cooperation as soon as possible."

Yohanes Sulaiman, an Indonesian military expert, said the suspension was significant but predicted it would not last long as cooperation between the neighbours was vital on matters such as security and trade.

"Both countries need each other," he told AFP. "They need to maintain security in the South China Sea especially now that China is becoming more dominant there."

There have been tensions between the Indonesian and Australian militaries in the past.

Australia suspended training with Kopassus over the notorious unit's alleged role in human rights abuses in East Timor in 1999 as the then Indonesian territory geared up for independence, but it resumed several years later.

In 2013 Indonesia suspended military exercises with Australia due to allegations that Australian spies tried to tap the phone of then Indonesian president Susilo Bambang Yudhoyono. They resumed in 2014.

The latest military suspension is the first serious row between the neighbours for some time, with relations having improved since Malcolm Turnbull became Australia's leader in 2015.