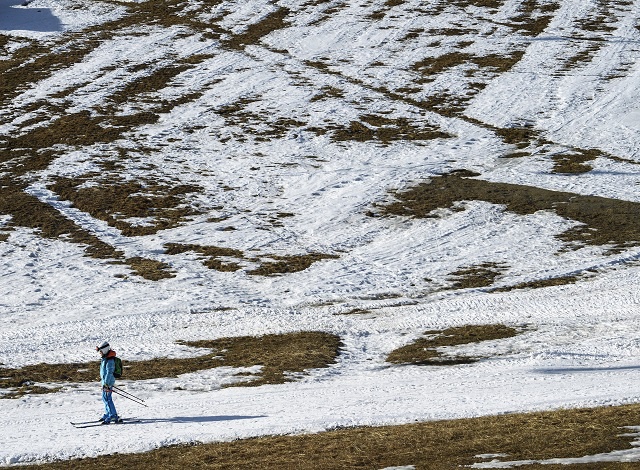 A girl skies down on January 2, 2017 in the Swiss Alps resort of les Crosets. Switzerland has just experienced its driest December in more than 150 years and one of its driest months on record, meteorologists said. Many places in the west of the country did not see a single snowflake or drop of rain, it said, pointing out that usually the Swiss plains get nearly 90 millimetres of precipitation on average in December.(FABRICE COFFRINI / AFP)

(AFP) - A reported pause in global warming between 1998 and 2014 was false, according to US-British research published Wednesday that confirmed the findings of a controversial US study on ocean warming.

Their findings were reported in the US journal Science Advances.

The switch to buoy measurements had hidden some of the real-world warming during the 1998-2014 period, the NOAA scientists concluded.

The NOAA paper had drawn outrage from some scientists who insisted there had been a "global warming hiatus" and from critics who consider global warming a hoax.

The US House of Representatives, controlled by the Republican Party, had even demanded the NOAA scientists provide lawmakers with their email exchanges about the research.

The US government agency agreed to transmit data and respond to scientific questions but refused to hand over the emails of the study's authors, a decision supported by scientists worried about political interference.

"Our results mean that essentially NOAA got it right, that they were not cooking the books," said Zeke Hausfather, a graduate student in UC Berkeley's Energy and Resources Group and lead author of the new study.

The International Panel on Climate Change, in a report published in September 2013, said the average global warming between 1951 and 2012 had been 0.12 degrees Celsius (0.22 degrees Fahrenheit) per decade.

But between 1998 and 2012, warming had amounted to only 0.07 degrees Celsius per decade, indicating a 'global warming hiatus.'

The 2015 NOAA analysis, which was adjusted to correct for the "cold bias" of buoy measurements, found there was no detectable slowdown in ocean warming over the previous 15 years.

That brought the rate of ocean temperature rise in line with estimates for the previous 30 years, between 1970 and 1999.

The new study uses independent data from satellites and Argo floats, a worldwide satellite-based location and data collection system, as well as from buoys.

The information gathered confirmed the NOAA results in 2015 were correct, the scientists said.

"We were initially skeptical of the NOAA result, because it showed faster warming than a previous updated record from the UK Met Office," said Kevin Cowtan of the University of York.

"So we set out to test it for ourselves, using different methods and different data. We now think NOAA got it right, and a new dataset from the Japan Meteorological Agency also agrees," he said.

General » Be a reporter: Write and send your article » Subscribe for news alert
Tags: US, Britain, climate, warming, oceans, research