UN slams 'war crime' as 5.5 mn in Damascus without water 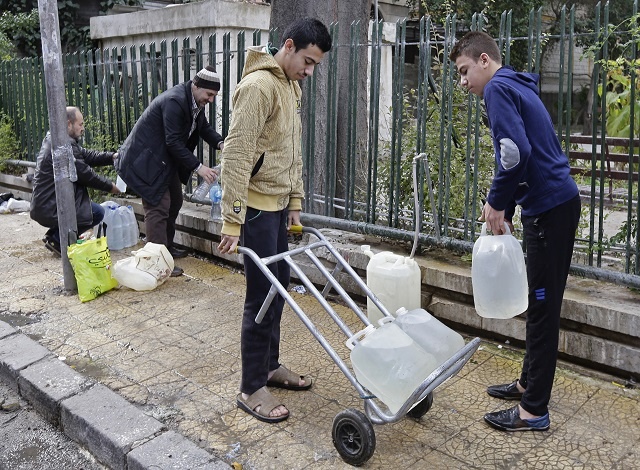 Syrians fill plastic containers with water at a public fountain in the capital Damascus on January 3, 2017. The regime of President Bashar al-Assad is trying to seize control of the region which supplies the main drinking water for four million inhabitants of the capital and surrounding areas.(LOUAI BESHARA / AFP)

"In Damascus itself, 5.5 million people have had their water supplies cut or minimised," the head of the UN-backed humanitarian taskforce for Syria, Jan Egeland, told reporters in Geneva.

The water from the rebel-held area of Wadi Barada, near Damascus, has been cut since December 22, causing major shortages.

The UN had previously said the crisis was affecting four million people in the Syrian capital.

The regime and rebels have traded accusations over responsibility, and Egeland said the United Nations had so far been unable to access the damaged water mains to determine which side was to blame.

Government forces backed by Lebanon's Hezbollah group are fighting to recapture Wadi Barada even as a nationwide ceasefire has brought quiet to other parts of Syria in preparation for renewed peace talks.

The government accuses rebels in the area of deliberately targeting water infrastructure, causing leaking fuel to poison the supply to the capital, and then cutting the flow altogether.

Rebels meanwhile say the infrastructure was damaged in government strikes.

"We want to go there, we want to investigate what happened, but first and foremost restore water," he said, warning that the consequences of the water cuts were already "dramatic".

He stressed that "to sabotage and deny water is of course a war crime," Egeland said, pointing out that such a move mainly impacts civilians "who drink it and ... who will be affected by waterborne diseases ... if not restored."

Egeland also decried that a fragile, week-long truce in Syria had yet to translate into more access for humanitarian workers.

"I'm disappointed that so far the cessation of hostilities … is not increasing our access" to deliver aid, he said.

He called on the main backers of the ceasefire, Russia and Turkey, to make good on a vow to help facilitate desperately needed humanitarian access on the ground.

UN peace envoy for Syria Staffan de Mistura meanwhile voiced optimism that the ceasefire and talks being organised by Russia and Turkey and set to start in Astana on January 23 could help create momentum for the UN-backed peace process.

"We believe that any effort again that consolidates … the cessation of hostilities and helps in preparing a (UN-backed) discussion that will take place here in Geneva in February is certainly welcome," he told reporters.

"We plan to attend … and we will contribute," said de Mistura, who has said he aims to relaunch the UN-back Syria peace talks on February 8.

More than 310,000 people have been killed in Syria and over half the country displaced since the conflict began in March 2011.