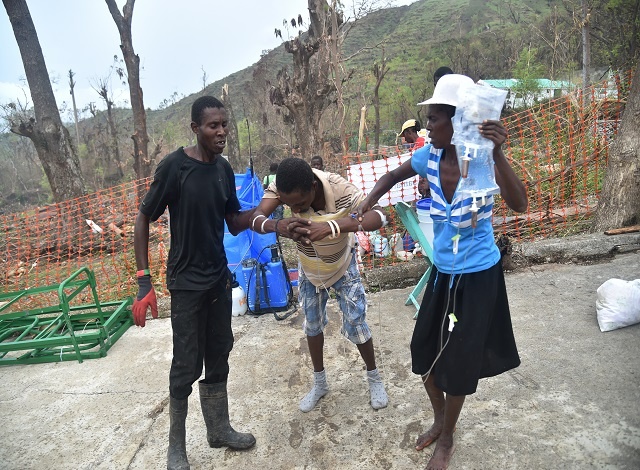 A patient with cholera symptoms arrives in a hospital of field of Samaritan's Purse to receive medical attention in Randelle, Haiti, on October 19, 2016. Food, medicine and other essential aid has been slow to reach areas slammed by Hurricane Matthew. Some desperate Haitians have taken to blocking parts of the road crossing the southern peninsula to intercept humanitarian convoys, in some cases looting them. (HECTOR RETAMAL / AFP)

(AFP) - The United Nations is struggling to get pledged aid for Haiti's cholera epidemic victims but hopes nascent political stability will inspire confidence in donors and investors.

In early December, the United Nations for the first time apologized to Haitians for its role in the epidemic. It announced a plan to help the victims' families and bolster the fight against the disease, hoping to mobilize $400 million over two years.

But donations have only trickled in, said David Nabarro, a British doctor who is special adviser to the UN on the organization's sustainable development agenda.

According to independent experts, cholera was introduced to Haiti, the poorest country in the Americas, by infected Nepalese UN peacekeepers deployed there after a devastating 2010 earthquake.

Since then, the disease has killed more than 9,400 Haitians and infected more than 800,000 people. Cholera causes severe diarrhea and can be spread through contaminated food and water.

Nabarro singled out France and South Korea "for special praise" in the response to the cholera outbreak in Haiti.

"I am not disheartened," Nabarro said, forecasting that more countries would contribute to the fund within the next two or three months.

The UN has mobilized between $60 million and $100 million to improve the country's inadequate sanitary infrastructure, and more than $10 million to speed up the emergency response to the epidemic.

Only $2 million has been made available for measures aimed to help the hardest-hit communities, such as infrastructure construction and education grants.

A UN team is currently in Haiti to evaluate its needs and coordinate the aid program with local authorities.

Nabarro, who led the international response to the recent Ebola outbreak that killed more than 11,000 people in West Africa, plans to attend the World Economic Forum's annual meeting later this month in the Swiss ski resort Davos to try to convince potential donors and investors to set up what he called a "long-term consortium" for Haiti.

A high-level meeting, focused on improvement of Haitians' access to clean water and sanitation, is scheduled on January 18 in Davos. The World Bank, the Inter-American Development Bank, the private sector and numerous foundations are due to participate.

Nabarro sees reason for optimism in the election of the new Haitian president, Jovenel Moise, after a long-running electoral crisis.

That closes a period of great political instability and raises Haiti's prospects of "moving out of the phase of humanitarian aid into longer-term development assistance," he said.

"There has been a successful presidential election and this makes a lot of difference to the ability of development banks to move money to a country," he explained.

On Tuesday Moise's victory in the November 20 election was made official, bringing to an end a political crisis that began in October 2015.

Nabarro cited "very positive signs for the future" and a cautious optimism among private investors.

"We are delighted that the election was found valid," he said. "We believe this is a signal to the rest of the world that Haiti is back on track politically."

Moise, 48, a banana exporter who has never held office, will be inaugurated on February 7. He takes the helm of a deeply divided country, both socially and politically, whose finances are drained.

A flare-up in cholera cases after Hurricane Matthew devastated the country in October has been contained. But the epidemic persists due to a chronic lack of sufficient financing.