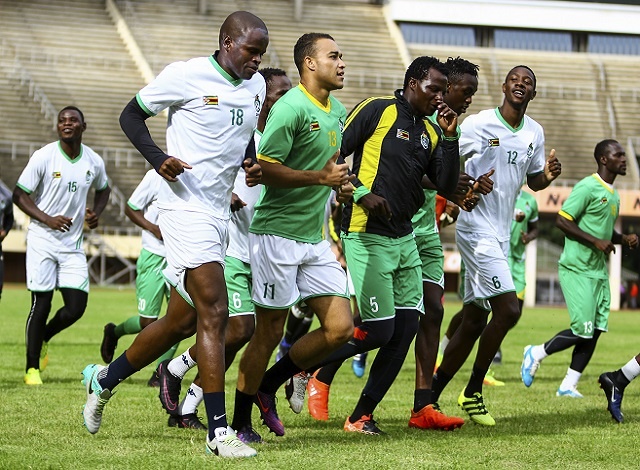 Zimbabwe's national football team (The Warriors) players attend a training session at the National Sports Stadium in Harare on January 6, 2017, ahead of the upcoming 2017 Africa Cup of Nations in Gabon. (Jekesai Njikizana / AFP)

(AFP) - Zimbabwe's national football team refused to board a flight for the Africa Cup of Nations tournament in Gabon, officials said Sunday, in a dispute over allowances and winning bonuses.

The team were due to fly together on Saturday to Cameroon to play a friendly on Tuesday before proceeding to Libreville.

After tense meetings with the Zimbabwe Football Association (ZIFA), some players finally left Harare on Sunday morning while the rest of the squad were set to depart later in the day.

"We had a fruitful meeting and the players and administration reached an amicable solution," ZIFA spokesman Xolisani Gwesela told AFP, declining to elaborate how the impasse was resolved.

On Friday, players sat in hotel corridors and refused to attend a farewell dinner at which the country's Vice-President Emmerson Mnangagwa was guest of honour.

"ZIFA totally condemns the behaviour portrayed by the team and their desire to hold the nation at ransom in their quest to earn money that this economy cannot sustain," the association said in a statement late Saturday.

Among a raft of grievances, the players rejected $1,000 (950 euros) appearance fees and demanded $5,000 instead, sources at the association said.

They also demanded $150 daily allowances for locally-based players and $500 for foreign-based players, instead of $50 and $100 respectively.

The players had earlier refused to use "substandard" accommodation at a facility run by the association and were barred from training at the national sports stadium over a $60 debt owed by ZIFA.

Zimbabwe's economy has been wrecked by hyperinflation, corruption and agricultural collapse, and the national football team has often relied on well-wishers to pay its players and coaches.

A cash shortage in the country has also seen football match attendances plummet.

Last year the country was expelled from the 2018 World Cup preliminary competition over non-payment of a $67,000 debt owed to former coach Jose Claudinei Georgini.