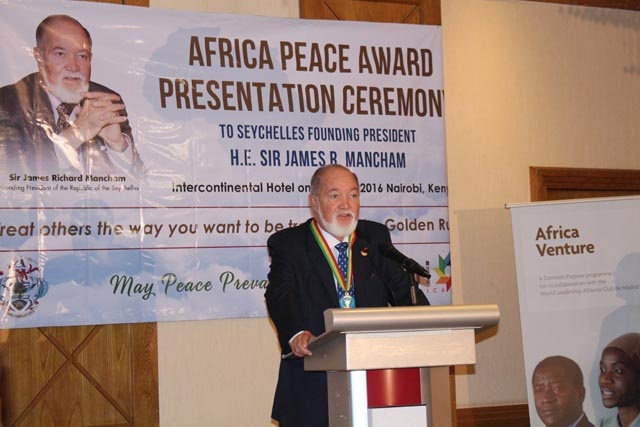 (Seychelles News Agency) - Former President of Seychelles James Richard Mancham died on Sunday at his residence at the age of 77.

Mancham, who held office from 1976 to 1977, was the first president of Seychelles, an archipelago in the western Indian Ocean.

Born on August, 5 in 1939 to successful businessman Richard, Mancham studied at the then Seychelles College before proceeding to study law at the Wilson College in London. Mancham was called to the Bar at Middle Temple, one of the four Inns of Court, in 1961.

He returned to Seychelles a year later and from 1963 to 1967 served as Barrister and Attorney-at-Law before the Supreme Court of the island nation.

In 1964, when England was giving independence to its colonies, Mancham created the Seychelles Democratic Party (SDP), representing businessmen and planters who wanted close integration with Britain. SDP came after France Albert Rene had founded the pro-socialism and pro-independence Seychelles People’s United Party (SPUP).

SDP won the majority in the legislative elections in 1966, making Mancham the Chief Minister.

The former president was in the building of what is now the Seychelles International Airport at Pointe Larue, making the islands more accessible to the rest of the world.

Mancham was the first person to disembark from a wide-bodied plane in Seychelles on July 4, 1971 -- the BOAC SUPER VC10 -- the first jet aircraft to land at the country’s International Airport.

He was also a promoter of the tourism industry, now the number one contributor to the Seychelles' economy.

Mancham’s SDP won the popular vote after Seychelles got its independence on June 29, 1976, becoming the country’s first president.

On June 5, 1977, Rene took over power in a coup d’état when Mancham was attending the Commonwealth Heads of Government conference in London.

Mancham went in exile in London for 15 years, where he occupied several posts such as the President of Berlin European Airways and President of International Promotion Marketing and Development.

While in exile, Mancham married Catherine Olsen, an Australian journalist working in London. He also wrote and published several books including Island Splendour; Paradise Raped: Life, Love and Power in the Seychelles; Galloo: Island of Many Dreams; and Peace of Mind: Reflections on Life.

The former president returned to his native land in April 1992, a year after Rene announced the return of multiparty politics in Seychelles. Mancham took over the leadership of the Democratic Party (DP).

Mancham did not win another election and stayed as DP’s leader until 2005, when Nichol Gabriel assumed leadership.

After retiring from politics, Mancham actively promoted the interest of Seychellois both locally and abroad, focusing on economic development and international relations. In September 2009 he published his autobiography “Seychelles Global Citizen: The Autobiography of the Founding President.”

He also wrote “Seychelles: The Saga of a Small Nation Navigating the Cross-Currents of a Big World” in March 2015.

During his career and retirement, the founding president of Seychelles has received many awards and made international headlines.