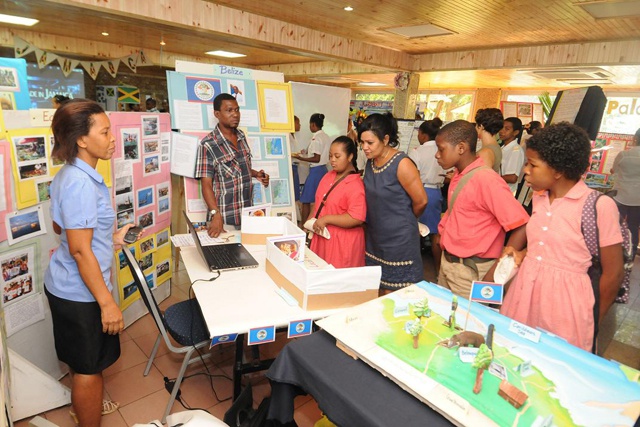 Some 30 schools participated in the exhibition to showcase the different aspects of a selected island nation (Jude Morel, Seychelles Nation)

It is to highlight these issues that the Seychelles Ministry of Education and that of Environment and Energy have worked together to organise and exhibition to commemorate World Environment Day which falls on the 5th of June.

Initiated by the United Nations General Assembly in 1972, the World Environmental Day in a bid to encourage global awareness and action for the environment.

The exhibition which opened at the International Conference Centre in the Seychelles capital of Victoria fits well with the theme for this year’s World Environmental Day which is “Small Island Developing States (SIDS) and Climate Change” and the slogan is “Raise your Voice, Not the Sea Level”.

All schools were invited to take part in the exhibition (there are 33 public schools and 3 private schools in the archipelago).

Each had to showcase the different aspects of a selected island nation which has seen some schools going as far as to prepare traditional clothing, dance and dish for the exhibition which is in fact a competition.

“There are approximately 30 schools that have taken part….As there were more SIDS than the number of Schools, we allowed each school to make their own choice of the island they wanted to represent,” Jeanette Larue, the coordinator of the event told SNA.

Larue explained that the competition was launched in February so as to give the children enough time to do sufficient research. Many schools have had to liaise with other schools from the different small island states in order to complete their research.

“I’m very impressed with the exhibits since the school did over and above what was expected of them,” says Larue adding that she is also happy to see that the children didn’t seem to be competitive but rather enjoyed being the ambassadors of the respective countries for one day.

The competition will be judge on the availability of factual information, knowledge about the culture, traditions, economies, challenges faced by the SIDS amongst other criteria.

“It is important that children are sensitised about the impact our actions can have on the environment, so that in the future they can make better choices,” says Larue.

For this year’s World Environmental Day Seychelles has in fact been chosen to host the regional celebrations which has in fact started today.

In a press statement from the Seychelles Ministry of Environment and Energy on Monday the United Nations development Programme representative and Regional Director for Africa, Mounkaila Goumandakoye said: “The SIDS can be the blueprints of innovative approaches to sustainable development. As the regional host of the regional celebrations of this year’s World Environment Day ahead of the historic United Nations Environmental Assembly, Seychelles, as a pioneer in environmental protection and conservation, will have the opportunity to showcase these initiatives and set an example for many SIDS facing similar challenges and for rest of African countries who can learn from this example.”

For his part the Seychelles Minister for Environment and Energy Professor Rolph Payet highlighted the fact that 2014 is an important year for SIDS.

“This year is an important year for islands, being at the frontlines of climate change and the cradle for endemic biodiversity, so let us all join hands to protect our islands as our planet will never be the same without our islands” said Payet.