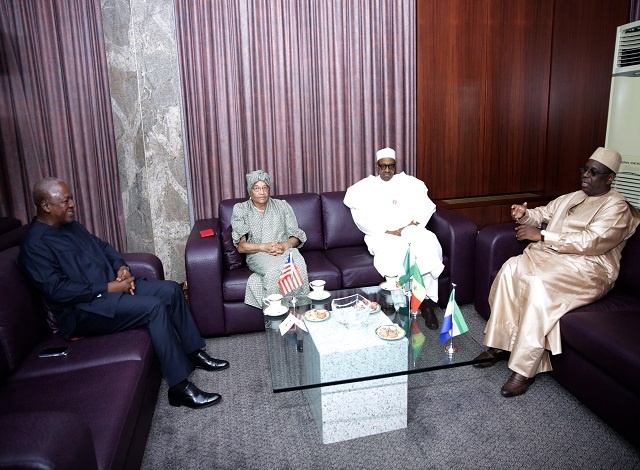 (From L) Former President of Ghana John Mahama, President of Liberia Ellen Johnson Sirleaf, President of Nigeria Muhammadu Buhari and President of Senegal Macky Sall meet in Abuja on January 9, 2017, on the political situation in Gambia. West African leaders announced on January 9 they would return to Gambia to persuade President Yahya Jammeh to step down, as the strongman was left looking increasingly isolated at home and abroad.(SUNDAY AGHAEZE / AFP)

(AFP) - West African leaders announced they would return to The Gambia this week to try and persuade President Yahya Jammeh to step down, but said the use of force remains an option.

The mandate for Jammeh's five-year term expires on January 18, after which president-elect Adama Barrow is supposed to take power.

But the strongman, in power for 22 years, has vowed to stay in office until a dispute over the election result is resolved, despite becoming increasingly isolated at home and abroad.

They will impress upon Jammeh "the imperative to respect the constitution", Nigeria's foreign minister, Geoffrey Onyeama, told reporters in Abuja on Monday.

There are worries in The Gambia over worsening security, a potential refugee crisis and a media crackdown that has taken several radio stations off air.

And while Onyeama said a peaceful transfer of power was preferable, force could be used. "Violence should be avoided but nothing is ruled out," he said.

The regional leaders made a previous attempt at mediation with both sides in the electoral dispute in mid-December, a couple of weeks after the poll, but failed to make a breakthrough.

In Banjul, Jammeh sacked his Information Minister Sheriff Bojang and replaced him with a National Assembly member who was appointed this month as the ruling party's spokesman.

Bojang had previously managed The Standard Newspaper, which was closed in 2012 after criticising Jammeh's regime. A statement carried on Gambian public television on Monday did not give a reason for his dismissal.

A foreign ministry source on Monday confirmed that Jammeh had also fired ambassadors to 12 nations, apparently for disloyalty.

All the envoys had expressed support for Barrow in late December, and asked Jammeh to step aside and respect the result of the December 1 vote, which delivered the opposition leader a narrow victory.

"I do not know why President Yahya Jammeh terminated their services, but I can tell you that these are the ambassadors that congratulated and endorsed President-elect Adama Barrow for his election victory," the source told AFP on condition of anonymity.

Authorities also refused to release from custody the former director-general of Gambia's state television and radio broadcaster, despite a court decision to grant him bail.

Momodou Sabally was arrested on 8 November 2016 along with a colleague after broadcasting images of the opposition when Jammeh's wife was due to appear, according to Human Rights Watch.

On Monday the Banjul High Court ruled that he should be bailed, but the National Intelligence Agency holding Sabally refused to comply when presented with the order, judicial staff told AFP.

Meanwhile it appeared increasingly clear there would not be the requisite number of judges Tuesday sitting for Jammeh's Supreme Court case against the Independent Electoral Commission (IEC), where he is seeking to have the election result overturned.

Nigerian and Gambian legal experts told AFP that although five Nigerian judges and one from Sierra Leone had been invited to hear the case, none had responded.

The Gambia relies on foreign nationals as judges due to a shortage of nationals with the requisite training and experience.

Jammeh and his political party have now lodged three separate legal complaints with the Supreme Court alleging manipulation of ballot counting by the IEC and intimidation of supporters.

Gambian legal expert Aziz Bensouda said a quick resolution was unlikely and constitutionally Jammeh still had to step down by the end of his official term.

"In the absence of a court and the pure impossibility of the parties being served in time to appear and enter a response, it seems that an adjournment of the case will be the most likely outcome," he said.

Jammeh's own lawyer Edward Gomez told AFP earlier he did not know how many judges would appear on the day.

Chief Justice Emmanuel Fagbenle is the panel's only sitting judge, as the Supreme Court has lain dormant since May 2015.

Tension and uncertainty has gripped the Gambian capital, with the US embassy sending non-essential staff and family members out of the country, as well as urging citizens not to travel there.

A statement issued Monday by the US ambassador described Tuesday's court case as "a potential flashpoint that could lead to civil unrest."