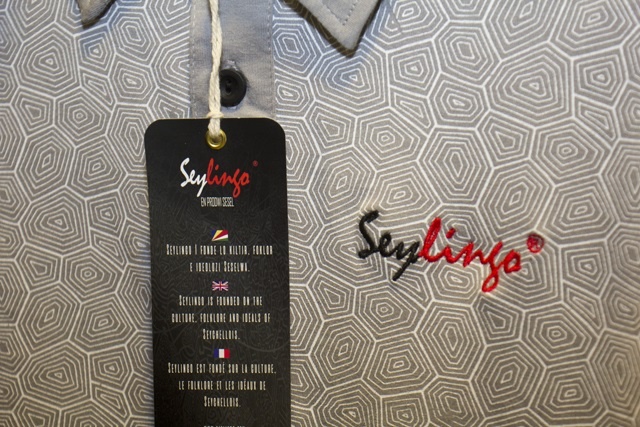 (Seychelles News Agency) - Seychelles' heritage is being promoted through a recently launched clothing collection that embraces two of the country’s native species – the giant tortoise and the coco de mer.

Ronny Julius, 28, hailing from Anse Aux Pins, in the east of Mahe, is the founder of the Seylingo clothing brand. Julius told SNA, “These two collections are related to our heritage. It is not enough to put a giant tortoise or coco de mer on a T-shirt and write Seychelles on it. ”

Julius said the launching of the first collection coincided with the Creole festival of 2015 under the theme “Mon idantite,” the Creole term for ‘My identity.’

The collection was named #FK2015 short for ‘Festival Kreol 2015’ and followed by the second collection called ‘awareness’. T-shirts were black, red and green with gold printing.

In the collection ‘Karapas’ there are designs of the carapace of the Seychelles’ giant tortoises and the ‘Lodosya’ collection has designs of the coco de mer. These are smart-casual collections and come in white, black and grey, colours that Julius said matches with whatever the buyer is wearing.

The cotton polo T-shirt are on sale at the Bedos clothes shop located in Unity House in Victoria, the capital of Seychelles, an archipelago in the western Indian Ocean. Orders of T-shirts can be made through Seylingo’s page on Facebook. Prices range from $22 to $33 (Seychelles Rupees 300 to 450).

The name Seylingo is a combination of two words - Seychelles and lingo, another word for language. Julius, who is a law student at the University of Seychelles, said the reason why he chose ‘lingo’ is that he wanted the brand to communicate to people.

“The idea behind Seylingo was to give Seychellois and tourists a brand that is unique, sold only locally. I noticed that most souvenirs outlets here in Seychelles are selling almost the same thing with Seychelles written on them,” said Julius.

The founder of Seylingo said that the cut and design of the T-shirts are done locally whereas a manufacturer overseas does the sewing and printing.

Founded in 2015, the concept behind the brand was to give value to the Creole language Julius told SNA.

“I don’t think that we should be afraid of exposing our identity from our language to our heritage. It is all part of who we are,” he said.

At the moment, there is no attire for children, a market that Julius describes as difficult, but it is part of his plans.

To promote his brand, Julius soon will be holding a ‘Selfie Competition’ on Seylingo’s Facebook page, with interesting prizes.