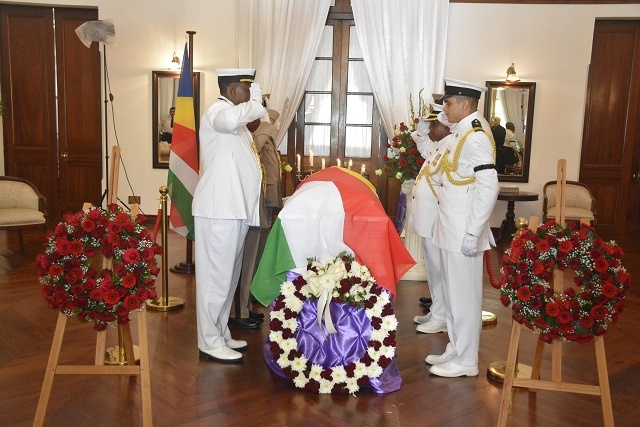 The former president’s funeral which was broadcast live on Seychelles' national television and radio stations started in the morning at Palais des Sports, a sport complex on the outskirts of Seychelles’ capital, Victoria.

A large crowd of mourners paid their last respects to the first president of Seychelles, a group of 115 islands in the western Indian Ocean.

A strong supporter of the Democratic Party of which Mancham was the former leader, Patrick Joubert said there is something about losing the founder of a nation that is inexpressible and permanent.

“This man has contributed greatly to the prosperity of this nation. Let the memories we shared of him give us comfort into shaping a better future, the future he wanted for Seychelles,” Joubert said.

One of Mancham’s childhood friends, Bill Mohamed, 73, told SNA that he was Mancham’s first bodyguard and they went to school together.

Mohamed said Mancham was a people person with a kind heart.

“He never had a heart for revenge as he was always pressing for forgiveness. In fact, peace was what he was aiming for when he came back from exile, but we failed to understand him,” Bill said.

From Palais des Sports, the funeral moved to the State House for a private ceremony for close family members, friends and top officials of the Seychelles’ government.

The funeral procession to Palais des Sports, State House and the cathedral was led by a police escort and traffic had to stop in some areas to give way, while at others, roads were temporarily closed until the cortege reached its final destination.

The memorial service took place at the cathedral of the Immaculate Conception in Victoria, where mourners gathered to bid farewell and paid homage to the founding president of the republic of Seychelles.

In his eulogy, the Roman Catholic Bishop Denis Wiehe spoke about Mancham in reference to the parable of the space occupied by each tree in the forest which cannot be seen until a tree falls leaving a void.

Wiehe said although Mancham has been active before he died, “It is only now that with his passing away that we fully realise the important role he had played in the history of Seychelles for the past 50 years."

The Roman Catholic Bishop added that, “The call for reconciliation comes from far away and has biblical roots since the bible continuously calls us to conversion and repentance, not to seek revenge.”

The Seychelles Designated Minister, Macsuzy Mondon, said Mancham will always be remembered for the many years of his life devoted to the service of his country.

“He carried high the banner of his conviction and whose principles helped shaped the modern and peaceful Seychelles of today. He contributed tremendously to the independence of Seychelles and played a central role to the country’s move to multi-party democracy,” said Mondon.

The body of Mancham, the president of Seychelles from 1976 to 1977, was laid to rest at the State House cemetery.