Mali urges Gambia's leader to avoid 'bloodbath' and step down 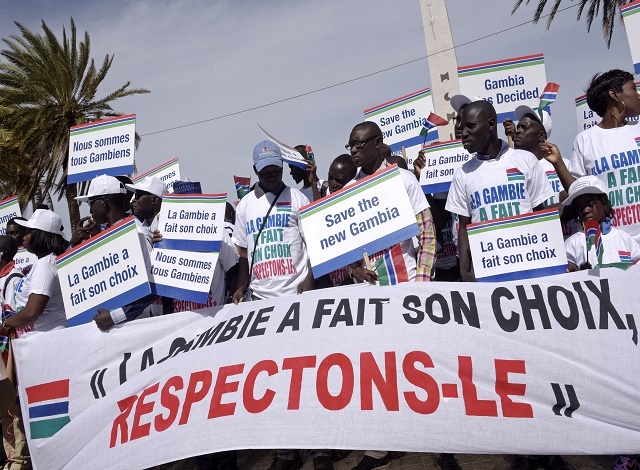 People hold a banner reading "Gambia made its choice, let's respect it" along with placards reading "Save democracy in Gambia, save the new Gambia" during a protest in support of Gambia by Senegalese NGOs and civil rights groups in Dakar on December 17, 2017. Longtime Gambian leader Yahya Jammeh, who initially conceded defeat in a December 1 presidential poll, has lodged a Supreme Court case to challenge the result, despite pressure from the international community for him to cede power peacefully. The opposition in the small West African country, however, fears Jammeh will use a judicial system -- considered by experts to lack independence -- to give legitimacy to his attempt to hang on to power. (SEYLLOU / AFP)

(AFP) - Mali's president called Saturday for Gambian leader Yahya Jammeh to step down and avoid an unnecessary "bloodbath" by clinging to power and forcing a potential military intervention.

The Gambia's political crisis dominated a summit co-organised by Mali and France as Gambian president-elect Adama Barrow made a surprise appearance to meet with west African leaders seeking their help to end the impasse.

"On January 19, I dare to hope that African wisdom will convince our brother (Jammeh) that the good Muslim that he claims to be understands the greater good for The Gambia, which does not need a bloodbath," President Ibrahim Boubacar Keita told journalists.

Barrow is expected to take power on January 19 when Jammeh's mandate runs out, but the strongman has refused to cede power after disputing the result of a December 1 election won by Barrow.

"We have made a strong gesture. First, we have received the president," said Keita, referring to Barrow.

Malian and Ghanaian sources confirmed to AFP heads of state had also received Barrow on the margins of the summit.

The leaders of at least 30 nations had gathered in Bamako to discuss jihad on the continent and Africa's impact on the European migrant crisis -- but the Gambian crisis ended up topping the agenda.

The Economic Community Of West African States (ECOWAS), a 15-nation bloc, has repeatedly called on Jammeh to respect the result of the vote and leave after 22 years in power.

The spectre of a military intervention rose after declarations by the United Nations and African Union in recent days that boots on the ground could get the green light without a rapid resolution of the crisis.

Mohamed Ibn Chambas, head of the UN Office for West Africa and the Sahel, said on Friday that ECOWAS would ask the Security Council to approve the deployment of troops to The Gambia if Jammeh continues to refuse to leave office.

ECOWAS has made clear in the past force will not be ruled out as a last resort.

In a sign of Barrow's growing international clout, French President Francois Hollande met the president-elect and was pictured shaking his hand.

There are just four days left of Jammeh's five-year term, but he warned the international community on Tuesday that "undue external interference" was unnecessary.

Jammeh has said he will not stand aside until the country's Supreme Court decides on his legal challenge seeking to annul the result of last month's polls, which he had initially conceded.

The ruling however is unlikely to happen before May.

It was Hollande's last trip to Africa as president before his term ends, and Keita described him as the "most loyal" of French presidents to the continent.

In a bid to help crush the jihadist threat, France has trained more than 20,000 African soldiers every year since 2013, according to a French diplomatic source.

Hollande said French forces would stay in Mali "for as long as the African countries -- and there's not just Mali -- decide."

"Our goal is to train African armies… to secure the Sahel-Sahara zone," Hollande said. "But it will be long, because we face terrorist groups that are particularly well-armed and determined to destabilise the entire region."

Another issue at the summit was the sensitive topic of migration to Europe.

Underscoring this, Keita said his country would "never" sign any agreement that would allow Europe to deport Malian citizens living illegally back to his nation.

The Dutch foreign ministry signed a joint declaration on the EU's behalf on December 11 which it said would "enable the return from Europe of Malian migrants," an agreement Mali later said was misunderstood.

Meanwhile overshadowing the summit was an admission by the French defence ministry on Friday that French soldiers deployed to northern Mali had killed a child during a counter-terror operation in November, and promised an inquiry into the 10-year-old boy's death.

According to the French-language magazine Jeune Afrique, the victim was buried in secret by the soldiers.