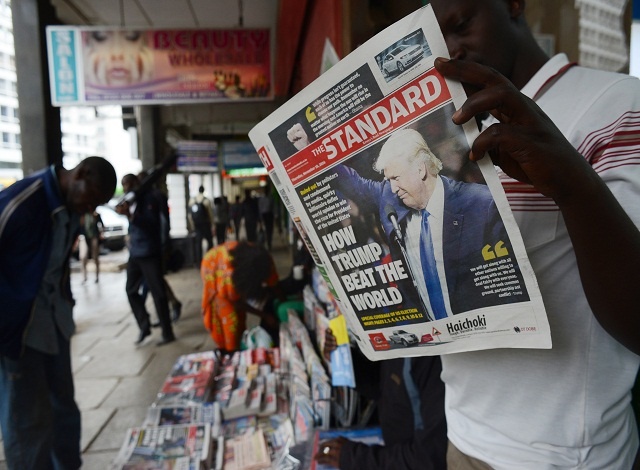 People read a Kenyan daily newspaper with the front page showing newly elected US President Donald Trump in Nairobi on November 10, 2016. Donald Trump's extraordinary US election victory sent shockwaves across the world on November 9, 2016, as opponents braced for a "dangerous" leader in the White House while fellow populists hailed a ballot-box revolution by ordinary people. America's allies put a diplomatically brave face on the outcome of the deeply divisive presidential race, which has implications for everything from trade to human rights, climate change to global conflicts. (SIMON MAINA / AFP)

(AFP) - Kenya's election commission began a national drive to register millions of new voters ahead of the August presidential poll, with rival parties encouraging their supporters to sign up on time.

Kenyans will go to the polls on August 8 in what is set to be a hard-fought general election decided in large part by the core support of candidates' ethnic constituencies.

The Independent Electoral and Boundaries Commission (IEBC) said its 'Mass Voter Registration' exercise would last from Monday until February 14 when registration will end.

Already 15.9 million Kenyans have registered, more than the 14.4 million who did so for the last election in 2013. IEBC officials predict an additional four to six million will register at nearly 25,000 centres nationwide in the coming weeks.

Any Kenyan citizen over the age of 18 and with a national ID card or passport can register by having their finger prints and digital photograph recorded.

"Let all Kenyans, leaders across the board, state and non-state actors get out there and mobilise eligible citizens to register as voters," Chiloba said.

Both President Uhuru Kenyatta's ruling party and the newly-formed opposition alliance are eager to get their supporters on the electoral roll.

"Citizens have been turned into voting machines," warned a weekend editorial in Kenya's main Daily Nation newspaper, arguing that people should not be coerced into registration by heavy-handed party activists.

"Unfortunately, the reason why voter registration has become the epicentre of combat is because voting has been turned into an ethnic census. Political coalitions, which are essentially an amalgam of ethnic entities, want to herd their kindred into voting blocs and use their numeric strength to wrest power."

Elections in 2013 were bad-tempered, close and disputed by Raila Odinga who came second, but they marked an important break from Odinga's 2007 loss to Mwai Kibaki, which was followed by weeks of politically motivated ethnic violence that killed over a thousand people.

Kenyatta's alliance with deputy president William Ruto in 2013 united their respective Kikuyu and Kalenjin ethnic groups, which had fought against each other in 2007. The International Criminal Court (ICC) accused both men of stoking the violence but eventually dropped charges of crimes against humanity after witnesses disappeared or recanted.

Last week five of Kenya's main opposition parties announced the formation of an alliance to unseat Kenyatta and Ruto, called the National Super Alliance (NASA), promising to back an as yet unnamed joint candidate. Odinga, a Luo who has contested three previous elections, is eager to run once again.