A tale of two speeches as Davos week begins 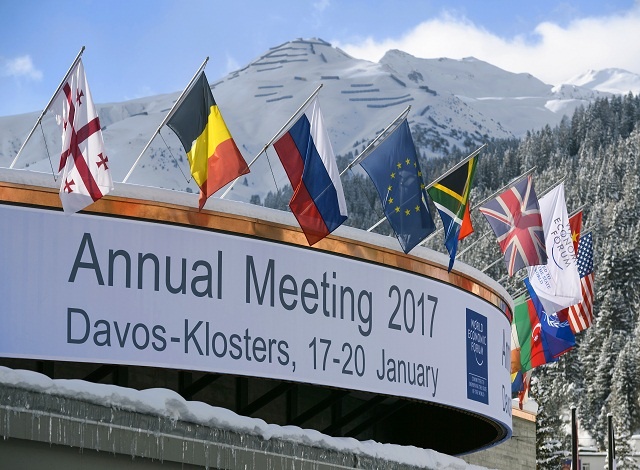 (AFP) - The global elite begin a week of earnest debate and Alpine partying in the Swiss ski resort of Davos on Tuesday, in a week bookended by two presidential speeches of historic import.

One will be by Xi Jinping, the first Chinese president to attend the World Economic Forum in Davos. He is expected to seek to turn the page on the US-led polity for trade that has governed since World War II in favour of a "multipolar" approach.

The other speech will be by Donald Trump when he is inaugurated in Washington as the 45th US president on Friday. His barnstorming conquest of the White House has left many in the globetrotting Davos crowd agog at his repudiation of all that they stand for -- liberal thought, free trade and open borders.

Around 3,000 government leaders, captains of industry, stars of screen and agenda-setting thinkers are braving heavy snow and the chill winds of an anti-globalisation revolt by Western voters to congregate in Davos for the 47th World Economic Forum.

Conscious of the revolt, organisers are billing the four days of discussions as "A call for responsive and responsible leadership", and top business executives agree that they must not appear oblivious to public anger.

"The advantages of globalisation are more clear in emerging markets then in developed countries. We have to listen, to help people that are concerned," Sergio Ermotti, chief executive of Swiss banking giant UBS, told AFP.

A World Economic Forum study said that within advanced economies, median per capita income fell on average 2.4 percent over the past five years, helping to explain why disaffection is so high across the West.

And the scale of the chasm between the richest and poorest was laid bare by an Oxfam report that said eight men own the same wealth as the poorest half of the world's population.

The eight include Microsoft founder Bill Gates, who is speaking at the forum this week, and Mark Zuckerberg of Facebook, which like several other companies has remodelled a Davos shop as a promotional "pop-up" venue.

Other research presented by the consultancy Edelman found public confidence in institutions including in governments, business, the media and NGOs slumping across the rich world.

"There is growing despair about the future, a lack of confidence in the possibility of a better life for one's family," chief executive Richard Edelman said.

The sense that the world is at an inflection point is apparent in the topics of debate at Davos, across hundreds of different panels.

One panel Tuesday will discuss "Why facts don’t unify us" any more. Another will ask whether the future of work is pregnant with "Promise or peril", given the impact of technology on jobs, a theme that is resonating loudly on the electoral front with Trump's victory, Britain's vote to quit the European Union and the rise of far-right parties across Europe.

China, meanwhile, is selling itself as the future as it touts new types of trade agreement shorn of US influence.

But China is in fact a self-serving "mercantilist" power that is not interested in crafting a beneficial new order, IHS Markit chief economist Nariman Behravesh said.

"So after Mr Xi's warm words, what is China actually going to do differently? I'm not going to hold my breath," he told AFP.

Away from debates on weighty issues such as reform of capitalism, artificial intelligence and a cure for cancer, Davos attendees including China's richest man Jack Ma and Hollywood star Matt Damon will get to unwind at exclusive apres-ski events dotted around the town.

But the party for "Davos Man" may be drawing to a close if the anti-elite backlash intensifies.

British Prime Minister Theresa May will address the World Economic Forum on Thursday, two days after outlining her vision for Brexit in another keenly awaited speech. Her predecessor David Cameron is also attending Davos, and will no doubt offer some rueful remarks on how he so badly misjudged the mood of British voters.

But the week's most consequential speech will come in Washington as Davos winds down Friday. What response, if any, that Trump offers in his inaugural address to Xi's vision for an alternative world order will provoke much soul-searching among the forum's great and good.