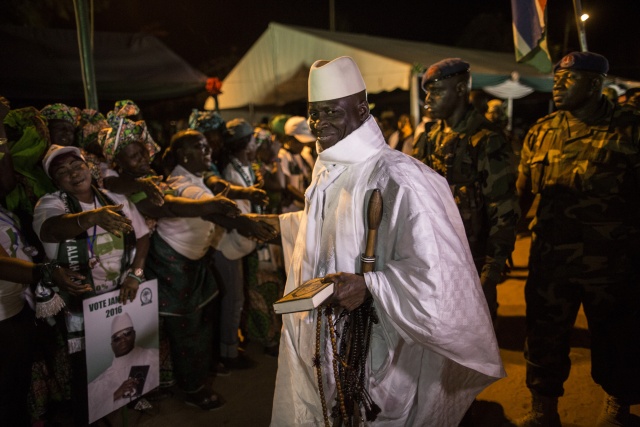 (FILES) This file photo taken on November 24, 2016 in Brikama shows Gambia's incumbent President Yahya Jammeh (C) smiling while being greeted by supporters as he arrives at a campaign rally ahead of the December 1 presidential election. Gambian president declares state of emergency, AFP reported on January 17, 2017 as President Yahya Jammeh is refusing to quit days before the planned inauguration of his rival Adama Barrow. (Marco LONGARI / AFP)

(AFP) - Gambia's Yahya Jammeh declared a state of emergency just days before he was due to step down, with British and Dutch travel agencies scrambling to evacuate thousands of tourists Wednesday.

Jammeh, who has ruled The Gambia with an iron fist for 22 years, initially acknowledged opponent Adama Barrow as the victor in December elections, but later rejected the ballot count as flawed and lodged a complaint with the country's Supreme Court.

He declared a state of emergency on Tuesday due to the "unprecedented and extraordinary amount of foreign interference in the December 1 presidential elections and also in the internal affairs of The Gambia," Jammeh announced on state TV.

Citizens were henceforth "banned from any acts of disobedience to the laws of The Gambia, incitement to violence and acts intended to disturb public order and peace," Jammeh said, asking security forces to maintain law and order.

Under the Gambian constitution a state of emergency lasts up to 90 days if the national assembly confirms it -- which the legislature did late Tuesday, a parliamentary source told AFP.

In Washington, the US State Department urged Jammeh to "peacefully hand over power" to Barrow -- who is in Senegal, where he plans to remain until his planned inauguration Thursday.

"Doing so would allow him to leave office with his head held high and to protect the Gambian people from potential chaos," spokesman John Kirby said. "Failure to do so will put his legacy, and more importantly The Gambia, in peril."

The 15-nation Economic Community Of West African States (ECOWAS) has also repeatedly urged Jammeh to respect the outcome of the vote and step aside, a call backed by the UN Security Council, African Union and others.

Jammeh has rebuffed two high-level delegations by west African leaders pleading with him to go.

"The potential for military intervention and civil disturbance is high," the British foreign ministry said on its website, a warning echoed on social media by its Dutch counterpart, who both urged citizens to avoid all but essential travel.

British travel agency Thomas Cook said it had "implemented our contingency plans to bring all our UK customers home," and was trying to arrange evacuation of up to 3,500 tourists from Banjul airport as soon as possible.

"We will operate a programme of additional flights into Banjul airport over the next 48 hours," the company said in a statement, adding this included four extra flights on Wednesday.

The Dutch travel firm TUI Nederland told AFP it would repatriate "about 800" clients.

They follow the high-profile defection last week of information minister Sheriff Bojang, who is now in neighbouring Senegal.

Citizens continued to pack their bags and stream out of Gambia -- a small, narrow enclave of Senegal except for its coast -- by road and ferry heading for Senegal, Guinea-Bissau and Guinea, taking as many possessions as they could carry.

One traveller told AFP that those arriving at 10:00 am would have to wait until the following day to board a ferry at Banjul port to cross the river headed for Senegal, unless they bribed officials, due to huge numbers exiting the city.

Military intervention in The Gambia seems closer than ever, following declarations by the UN and African Union that boots on the ground could get the green light without a rapid resolution to the crisis.

In Nigeria -- the regional power of west Africa -- a source at the country's military HQ said, "We are deploying to Dakar, Senegal, very soon."

"We are deploying platforms, a few personnel, pilots, technicians and the maintenance crew," said the source, speaking on condition of anonymity.

"You already know that this deployment is in connection with the unfolding development in The Gambia."

In Rabat, it was reported that Morocco had offered Jammeh asylum for accepting the election defeat and stepping down "in return for a golden retirement", but Banjul sources were reluctant to confirm the claim.

Seven journalists -- from Sweden and Senegal, plus four from Kenya and South Africa who were working for a Chinese TV channel -- were expelled late Monday soon after they arrived at Banjul airport to cover the ongoing crisis.

Africa » Be a reporter: Write and send your article » Subscribe for news alert
Tags: Gambia, politics