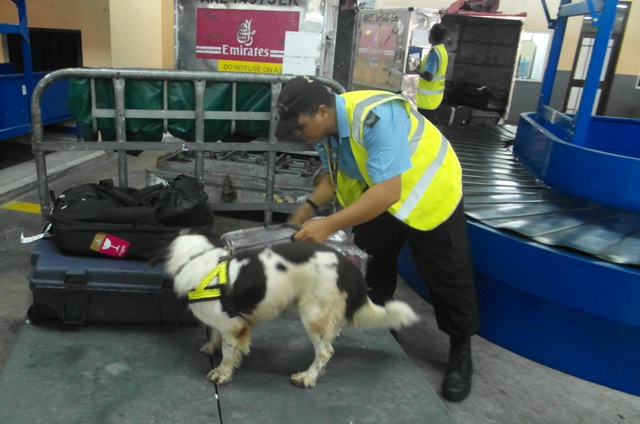 Police officer and dog, during the operation at the Seychelles International airport arrival terminal (Seychelles police)

(Seychelles News Agency) - Being islands in the Indian Ocean, the Seychelles’ borders are porous as traffickers seek to bring in illegal goods on boats and planes, under the noses of customs officers.

Stricter measures to control the sea and air borders are being put in place, as Seychelles has joined other African countries in the effort in combating transnational crimes in the region, which was showcased last Thursday and Friday as the Indian Ocean archipelago’s law enforcement authorities took part in an operation that was simultaneously taking place in Eastern and Southern African countries.

Codenamed USALAMA 1, the operation saw the participation of some 100 officers of the different unit of the Seychelles Police including the Dog unit, the Criminal Investigation Unit along with other partners namely Customs, the National Drug Enforcement Agency, Immigration and Port Authority amongst others.

During the two days they were involved in screening flights and passengers from abroad, monitoring of coastal fishing activities, cargo search as well as search operations on ships and also patrol on both land and sea.
In a press statement issued yesterday the Seychelles Police said: “Even though not many offences were detected, the operation had been described as a success in the sense that it went quite smoothly, it expressed understanding and good collaboration among the different law enforcement agencies and it was an excellent deterrent initiative.”

In a phone interview with SNA the officer in charge of the Seychelles Criminal Investigation Unit, Superintendent Christel Marie said they received the full cooperation of everyone especially passengers on incoming flights as well as the captains of different vessels that were searched.

“We did not come across many offences, we’ve had a case of coming across substance which we suspect might be drugs but this is still being analyzed, we have confiscated fruits or other items for which people do not have the necessary permit and this was dealt with by Customs,” said Marie.

“But generally all the stakeholders were satisfied and have proposed that such an exercise is carried out at random more than once a year.”

By grouping together to carry out such an operation the Eastern and Southern African countries are aiming to deter transnational crimes across their respective borders targeting offences such as trafficking in persons and people smuggling, drug trafficking, trafficking of stolen motor vehicles, wild life related crimes, theft of copper cable, smuggling of precious minerals and trafficking of small arms and light weapons.

The results of each of the different operations carried out as part of the USALAMA 1 will be presented when all the member states of the regional police bodies convene for a meeting in Seychelles in July.