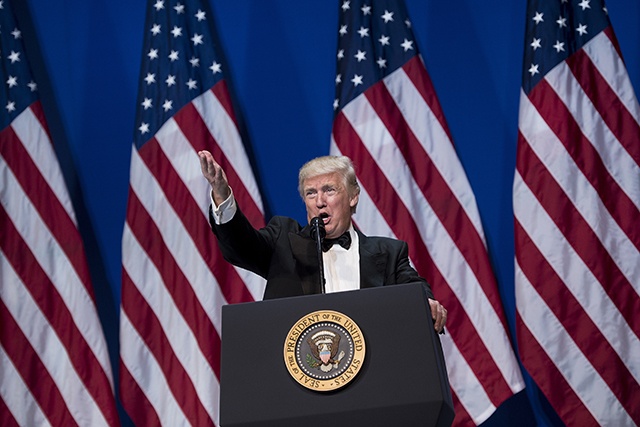 (AFPF) - Donald Trump awoke Friday as your everyday American billionaire. By noon he was sworn in as the nation's 45th president, on a whirlwind day that saw him thrust into the spotlight like never before.

The New York real estate mogul-turned-political megastar made a point of respecting the traditions of the world's most powerful office, and the process by which the peaceful transition of such power occurs.

But he also rocked tradition by delivering an inaugural address at times jarring for its staunchly nationalist tone and dark vision of the nation he was elected to lead for the next four years.

Trump, 70, began his Inauguration Day as many American leaders-to-be have done before him: with a visit to St John's Episcopal Church near the White House.

Clad in a dark overcoat, white shirt and bright red tie, Trump was joined there by his wife Melania and his adult children.

From there it was a quick ride to the White House -- also standard practice -- where the Trumps were greeted by outgoing President Barack Obama and First Lady Michelle Obama.

The two wives shared a hesitant embrace, and after the couples posed for photographs on the steps of the presidential mansion, they went inside for traditional tea before Trump's big moment at the US Capitol.

Even as Trump was on the verge of ascending to the nation's top office, he was maintaining a populist link with his millions of supporters, by continuing to post messages on Twitter.

"It all begins today! I will see you at 11:00 A.M. for the swearing-in," he tweeted before the church service. "THE MOVEMENT CONTINUES - THE WORK BEGINS!"

The present and future leaders arrived at the US Capitol to the strains of "Man of the Hour," performed by The President's Own US Marine Band.

But the man of the hour was hardly smiling, maintaining a stern bearing as he placed his left hand on two bibles and took the oath of office at exactly noon.

Only when the oath was complete, and he hugged his family and lay his hand upon Obama's shoulder in thanks did he appear more relaxed.

And he turned somber once more in his inaugural address. While the pomp and circumstance hewed closely to inaugural tradition, Trump broke a protocol of sorts by portraying a country in crisis.

"Mothers and children trapped in poverty in our inner cities. Rusted out factories, scattered like tombstones across the landscape of our nation," he said.

"The crime, the gangs, and the drugs that have stolen too many lives and robbed our country of so much unrealized potential. This American carnage stops right here and stops right now," he said.

"From this moment on, it's going to be only America First," he said, concluding his 16-minute speech with a campaign rally staple: two thumbs up and a double fist pump to the crowd.

Trump got to work right off the bat, heading to a small gilded room in the Capitol to sign a stack of executive orders.

He showed a serious demeanor as he signed formal cabinet nominations, with his children and grandchildren crowded around him.

But he cracked a smile when he signed former ExxonMobil chief Rex Tillerson's secretary of state nomination and looked up to quip "I assume he was approved today?"

"Not yet," replied Senate Democrat Chuck Schumer, who has sought to slow-walk some presidential nominees.

On the other side of the Capitol, Trump gathered with dignitaries including former US presidents Jimmy Carter, George W. Bush and Bill Clinton, who arrived hand in hand with Hillary Clinton.

The two bitter campaign rivals shook hands, with Trump leading a prolonged standing ovation for the former secretary of state.

As protests simmered just blocks away from the Pennsylvania Avenue inaugural parade route, would Trump get out of his armored presidential limousine, or remain comfortably inside?

Trump soon answered that question: emerging with the first lady and their young son Barron on three separate occasions.

The first couple took one another by the hand, and turned to wave at the crowd who cheered -- drowning out the boos of protesters who also lined the route. A beaming Trump waved and gave a thumbs up.

And at the White House, another tradition awaited the new president: a letter by outgoing president Obama, left in the Oval Office for its new occupant.

General » Be a reporter: Write and send your article » Subscribe for news alert
Tags: US, politics, inauguration, Trump, day