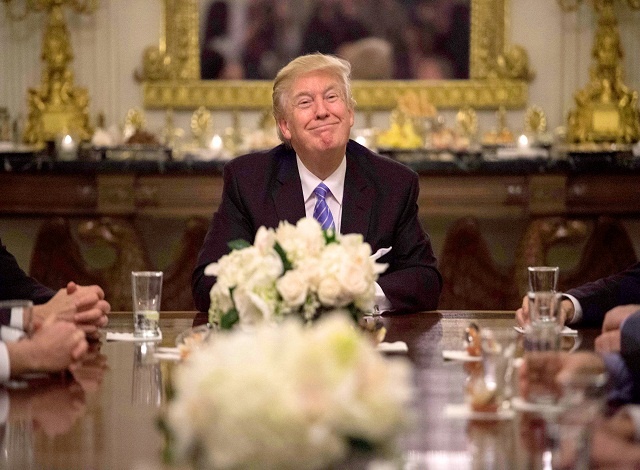 US President Donald Trump during a reception with Congressional leaders on January 23, 2017 at the White House in Washington, DC. (NICHOLAS KAMM / AFP)

(AFP) - A group of American lawyers on Monday filed a federal lawsuit in New York against Donald Trump, accusing the US president of violating a constitutional ban on accepting payments from foreign governments.

Trump dismissed the suit as "totally without merit."

The Citizens for Responsibility and Ethics in Washington (CREW) is pursuing Trump over his vast business holdings, from which the billionaire has refused to divest fully, saying that as president he can have no conflict of interest.

The decision not to divest has drawn fire from Democratic Party opponents and the government watchdog on ethics.

CREW says Trump's business properties abroad operate based partly on goodwill from foreign governments and regulators, but that under the US Constitution no federal official can receive a gift or "emolument" from a foreign government.

"Never before have the people of the United States elected a president with business interests as vast, complicated, and secret as those of Donald J. Trump," said the 37-page lawsuit.

"Now that he has been sworn into office as the 45th president of the United States, those business interests are creating countless conflicts of interest, as well as unprecedented influence by foreign governments," it added.

Trump, the wealthiest man ever to become US president, has handed over the running of Trump Organization, which has a network of hotels, golf clubs and luxury residences across 20 countries, to his two adult sons.

"Without merit. Totally without merit," the Republican president responded in answer to a question after signing executive orders in the Oval Office.

CREW cited payments from guests at Trump Organization hotels and golf courses and property leases by foreign governments as examples of "cash and favors."

Trump's lawyer Sheri Dillon said January 11 that Trump would donate all proceeds from any foreign officials to his hotels to the US Treasury, and that he "should not be expected to destroy the company he built."

The lawsuit, which a CREW spokesman said was filed Monday, is not seeking damages other than attorneys costs.

"We were forced to take legal action," CREW executive director Noah Bookbinder said in a statement. "It was our hope that President Trump would take the necessary steps to avoid violating the Constitution before he took office."

But John Coffee, professor at New York's Columbia Law School and director of its Center on Corporate Governance, questioned its validity without direct or serious injury.

"I am not saying they are making a political gesture, but others may make that inference," he told AFP.

Morgan, Lewis and Bockius, the law firm for which Dillon works, told AFP it did not comment on its clients nor the work it does for them.

General » Be a reporter: Write and send your article » Subscribe for news alert
Tags: US, politics, Trump, court