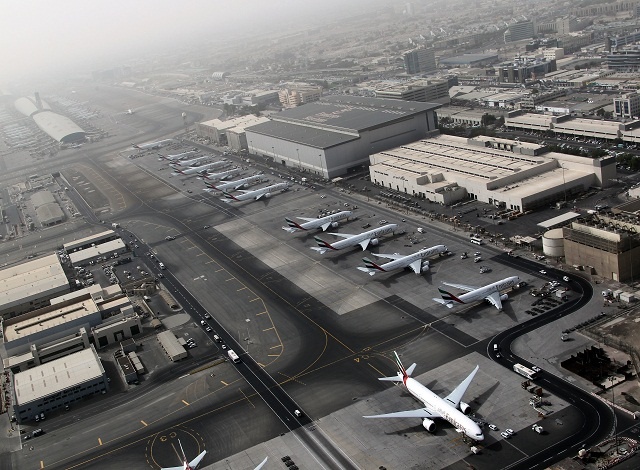 (FILES) This file photo taken on May 27, 2012 shows an aerial view of Dubai international airport. Dubai International cemented its title as the world's busiest airport for international passengers in 2016, with a 7.2 percent increase in travellers numbers to 83.6 million, its operator said on January 24, 2017. (Karim Sahib / AFP)

(AFP) - Dubai International cemented its title as the world's busiest airport for international passengers in 2016, with a 7.2 percent increase in traveller numbers to 83.6 million, its operator said Tuesday.

The airport, which serves as the home of Emirates airline, became the world's busiest in terms of international passenger traffic in 2014.

"With our new forecast for 89 million passengers in 2017, DXB is closing the gap on Atlanta and Beijing for the top spot in overall traffic," Dubai Airports chief executive Paul Griffiths in a statement.

The airport announced in February it was expanding its annual capacity to 90 million passengers with the opening of a new concourse.

Griffiths said at the time that Dubai Airports was expecting to receive 85 million passengers in 2016.

Situated on transcontinental air routes, Dubai is one of several Gulf-based airports to experience prodigious growth in recent years.

More than 100 airlines fly to around 260 destinations from the international hub.

In August an Emirates' Boeing 777 crash-landed at Dubai International, forcing authorities to cancel more than 200 flights. All passengers and crew were evacuated but a firefighter died while putting out the blaze.

Dubai's second airport, Al-Maktoum International, opened in 2013 and will be capable of receiving 120 million passengers a year once fully operational.