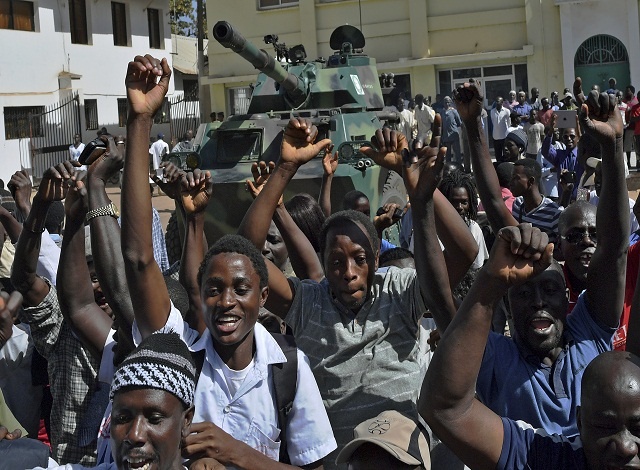 Gambians celebrate in front of an ECOWAS (Economic Community of West African States) armoured vehicle outside of the Statehouse in Banjul on January 23, 2017. (CARL DE SOUZA / AFP)

(AFP) - Gambian President Adama Barrow's administration faced a backlash Tuesday after admitting its new vice-president may be constitutionally barred from serving and confirming ex-leader Yahya Jammeh will be permitted to keep a fleet of luxury cars.

One day after naming Fatoumata Jallow-Tambajang as deputy leader, an outcry broke out after local media alleged she was 67 years old, two years over the legal maximum to serve in the post.

Barrow spokesman Halifa Sallah told journalists he was aware of the reports and advisors were recommending a parliamentary vetting process be put in place to avoid a similar situation, without confirming Jallow-Tambajang's true age.

"I have spoken to President Barrow that many concerns are being raised," Sallah said.

"The president has been carefully advised that he constitute a vetting committee," Sallah added, while asserting that "the appointment was done in good faith based on the facts that were available".

Barrow was in "final discussions with west African leaders "in order to announce the hour of coming," Sallah said, adding that he would arrive "very soon".

Barrow is currently living in Senegal until his safety can be guaranteed by thousands of soldiers from five African nations currently deployed in The Gambia, but unease is growing over his prolonged absence.

Equatorial Guinea Tuesday for the first time confirmed the presence of Jammeh in the small west African country, where he had been offered refuge as "a political exile".

The news came on the same day it was confirmed that ex-leader Jammeh had struck a deal with Barrow to keep a fleet of luxury cars in exchange for leaving the country on Saturday for exile in Equatorial Guinea.

An airport source who saw the cargo being prepared on Saturday night when Jammeh flew out of the country said "two Rolls Royces and one (Mercedes) Benz" were loaded onto a Chadian cargo plane, while 10 others await shipment.

"The government was fully prepared and supportive of ex-president Jammeh to leave and as a result they found it is better to leave with all his properties," his spokesman said.

The airport source even reported a tussle over whether to take Bentleys or Rolls Royces onto the cargo flight, before settling for the latter.

The news is likely to anger Gambians who have also learnt Jammeh took off with $11 million of state funds, according to one of his Dakar-based advisors, leaving the coffers nearly empty.

"I am so sickened by the deal; but I guess saving just one life on either side is worth more than all of his wealth," Twitter user @YesWeCan_Gambia wrote.

"It is true that the chief justice has resigned from his position. His resignation letter is dated 20th January. He is out of the country. He has gone back to Nigeria," judicial secretary Landing Sanneh told AFP.

Emmanuel Fagbanle had deferred a decision on hearing Jammeh's legal complaint over a lack of other judges to hear the case, but was known to be uneasy with the mercurial strongman's use of the court system to pursue his personal grievances.

The agency said "more than an estimated 8,000 people, as of Monday, have returned to their native Gambia since the political crisis there ended" when Jammeh left the country on Saturday night.