UK court to rule if Nigeria Shell claims can proceed 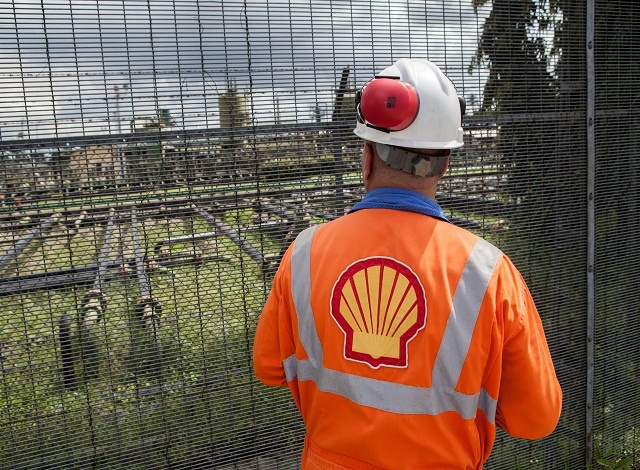 An employee at the Shell Agbada 2 flow station looks at the station from behind a gate in Port Harcourt on September 30, 2015. Nigeria is Africa's largest producer, accounting for roughly two million barrels of crude daily. Shell has blamed repeated oil thefts and sabotage of key pipelines as the major cause of spills and pollution in the oil-producing region. (FLORIAN PLAUCHEUR / AFP)

(AFP) - More than 40,000 Nigerians will on Thursday discover if London's High Court can rule on their pollution claims against Anglo-Dutch oil giant Shell over spills in the Niger Delta.

Lawyers for the claimants are demanding action from Shell to clean up spills that have devastated their communities for decades, but the multinational argues that the claims should be heard in Nigeria.

The firm's lawyer Peter Goldsmith told judge Peter Fraser during a hearing in November that the cases concerned "fundamentally Nigerian issues", and shouldn't be heard in London.

However, Daniel Leader from legal firm Leigh Day, representing the claimants, responded that the spills had "blighted the lives of the thousands" in the Ogale and Bille communities.

He said they had "no choice" other than to seek legal redress in London.

Shell maintains that the claims are issues of Nigerian common law, customary law and legislation given that "the events are said to have occurred in Nigeria and the alleged physical damage is all said to be found in Nigeria".

Goldsmith also argued that the case involves its Nigerian subsidiary SPDC, which runs a joint venture with the Nigerian government.

He claimed that the case was aimed at establishing the High Court's jurisdiction over SPDC, opening the door for further claims.

A key issue in the claim will be whether Shell can be held responsible for failing to protect their pipelines from damage caused by third parties.

Leigh Day said "it was clear to the claimants that Royal Dutch Shell is ultimately responsible for failing to ensure that its Nigerian subsidiary operates without causing environmental devastation.

"At the moment these communities have no choice -- they have to take them to court to get them to act," said Leader.

King Emere Godwin Bebe Okpabi of the Ogale community told AFP in an interview in November that his people had no option but to seek a ruling in London.

"Shell is Nigeria and Nigeria is Shell," he said. "You can never, never defeat Shell in a Nigerian court. The truth is that the Nigerian legal system is corrupt."

Holding up a plastic bottle containing contaminated water from his community in Nigeria, the tribal king said "my people are drinking this water".

"There are strange diseases in my community -- skin diseases, people are dying sudden deaths, some people are impotent, low sperm count," he added.

SPDC claims that the main sources of pollution in Ogale and Bille are "crude oil theft, pipeline sabotage and illegal refining".

The first claim is being brought on behalf of 2,335 individuals from the Bille Kingdom, who are mostly fishermen who claim their environment has been blighted by oil spills.

The second claim is brought on behalf of the 40,000 members of the Ogale Community, who say they have suffered repeated oil spills since at least 1989.