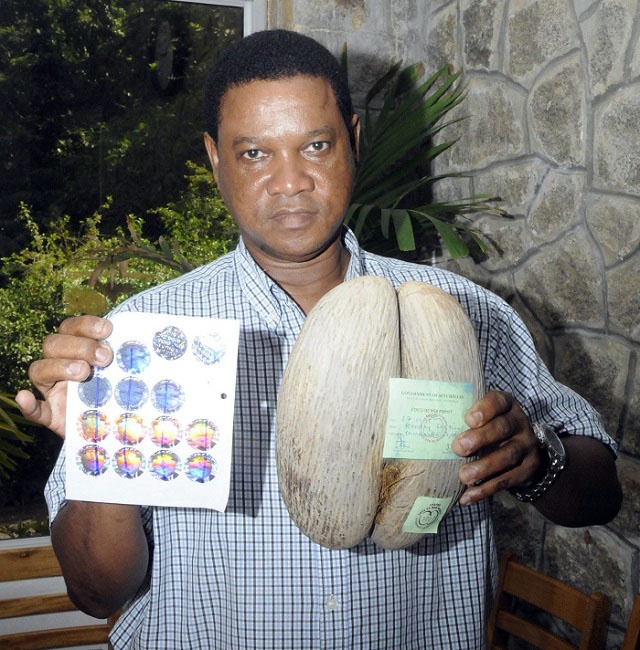 The principal secretary in the Ministry of Environment, Energy and Climate Change Alain de Commarmond, told the press on Wednesday that, “We had to relook at the existing tag that was easily falsified. Our coco de mer need to have better protection.”

De Commarmond added that, “Due to thefts and falsification of the old tag, the ministry had to invest in new security measures.”

Around $10,000 has been invested in the new tag which is modern and has holographic security features, making it more difficult for fraudulent imitation.

The security features in the new tag are visible when held up to light and include a coco de mer at a precise angle. The tag also contains an inviolability system, which when removed makes the coco de mer illegal.

“The new tag and permit system will improve the way the coco de mer is being produced, the way it is managed and traded,” said De Commarmond, adding that “the system will assist us to further fight poaching and other violations that threaten the endemic species.”

The ministry says the transition between the old tag and the new one will be gradual from now until the end of the year. The old tags can be exchanged for new ones at the office at Aarti Chambers, room 205 in the central district of Mont Fleuri, on Mahe, the main island.

Found only in Seychelles, an archipelago in the western Indian Ocean, the coco de mer is the largest nut in the world and grows naturally on Praslin, the second-most populated island and on Curieuse.

The nut is already listed as threatened by the International Union for Conservation of Nature, (IUCN).

The chief executive of the Seychelles Island Foundation (SIF) which manages the Vallée de Mai, Frauke-Fleischer Dogley said that a lot is being done to ensure that the reserve is preserved.

“We are undertaking research to understand the long life cycle of the coco de mer for example research on mortality rate to be able to establish the number of seeds needed for ensuring the regeneration of the forest.

Dogley added that “We hope to pursue more research in pollination, fertilisation and nut production.”

Parallel to the research, specific areas in the Vallée de Mai forest have been identified in which coco de mer is left to its natural process including germination to produce new trees, said the SIF chief executive

SIF has also developed outreach programme on the need for regeneration of coco de mer and translating scientific knowledge into easily understandable concepts for the local community.