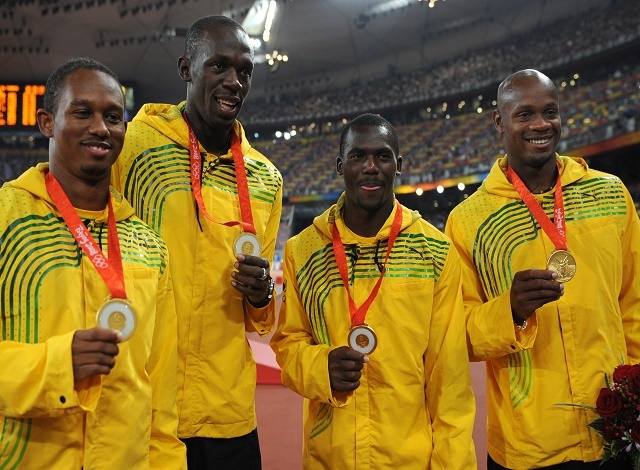 This file photo taken on August 23, 2008 shows Jamaica's Michael Frater, Asafa Powell, Nesta Carter and Usain Bolt posing with their gold medals during the medal ceremony for the men's 4x100m relay at the National stadium as part of the 2008 Beijing Olympic Games. The International Olympic Committee said on January 25, 2017 it had stripped Jamaica of their gold medal earned in the 4x100m relay at the 2008 Beijing Games after Nesta Carter was caught doping. The decision which follows the retesting of hundreds of samples from the Beijing event, means teammate Usain Bolt loses one of the three gold medals he won at that Olympics. Carter was found to have tested positive for banned substance Methylhexanamine.
(FABRICE COFFRINI / AFP)

(AFP) - Jamaican sprint superstar Usain Bolt insisted Thursday that the loss of one of his nine Olympic gold medals because of the doping sanction of relay teammate Nesta Carter won't tarnish his legacy.

"I am disappointed based on losing a medal, but it won't take away from what I have done throughout my career, because I have won my individual events and that's the key thing," Bolt said while attending the opening of a high school gym in Santa Cruz, Jamaica.

Bolt said he had already handed back the 4x100m relay gold from the 2008 Beijing Games, which the International Olympic Committee officially withdrew from Jamaica this week because of Carter's postive drug test.

"I am not fully happy about the situation but rules are rules," Bolt said, noting that Carter and Jamaica's athletics authorities are planning to appeal the sanction.

"We have to sit and see how that works out," he said.

Bolt, Carter, Asafa Powell and Michael Frater were on the Jamaican relay squad that was disqualified after Carter tested positive for the banned substance methylhexaneamine in a re-test of Beijing samples.

All of them surrendered their medals on Friday.

The loss of the relay gold deprives Bolt of one of his "triple triples" -- he won gold in the 100m, 200m and the 4x100m at Beijing and repeated the unprecedented feat in London in 2012 and again in Rio last year.

While conceding that the term “triple-triple” had "a nice ring to it" Bolt said he was looking forward.

"What can you do?" he said. "I've done all I wanted in the sport, I have really impacted the sport, I've really accomplished a lot so for me, I can't complain," he added.

He emphasized that his priority was to avoid distractions in order to train properly in the coming months.

"This is my last season and I want to go out on a winning note," said Bolt, who is heading for engagements in Australia next week said his immediate plans center on "just training" for competition.

Bolt, who is reportedly willing to contribute to funding of Carter's appeal, said he had not yet spoken to Carter since news of the lost gold medal, but stressed that there was "no bad blood" between them.

"I know it must be very hard, must be rough on him, I know how social media can be and I know how Jamaica is. So hopefully there is some love (being shown towards Carter).

"It's rough, things happen in life for reasons no one knows," he said. "I hope he doesn’t take it to heart."