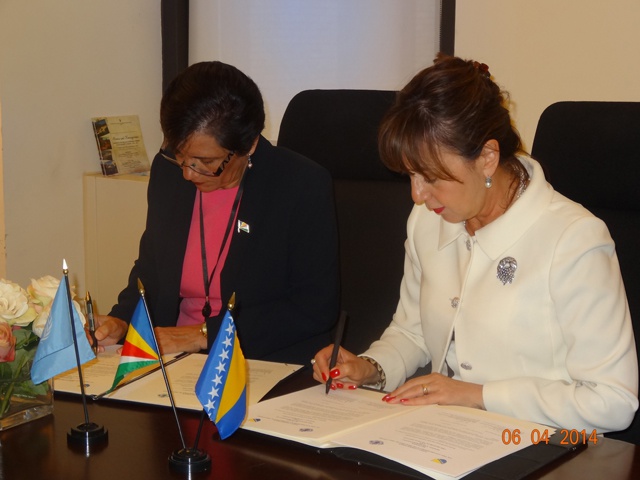 (Seychelles News Agency) - Seychelles has officially formalized its diplomatic relations with the south-eastern European country of Bosnia and Herzegovina in a bid to promote mutual understanding and to strengthen the friendship and cooperation between the two nations, according to a press statement issued today by the Seychelles Ministry of Foreign Affairs.

The two countries’ respective ambassadors to the United Nations, Seychelles’ Marie Louise Potter and Bosnia and Herzegovina’s Mirsada Čolaković signed the documents at the United Nations in New York on Thursday.

The agreement is expected to herald various forms of bilateral cooperation, particularly in the areas of trade and tourism, and it was proposed that the two nations sign Double Taxation Avoidance (DTA) and bilateral air service agreements in the near future.

“Ambassador Čolaković acknowledged the contributions and viewpoints that small countries such as Seychelles can bring to the Security Council, saying that the Council needed urgent reforms to fulfill its primary mandate of promoting and maintaining peace and security in the world.”

Ambassador Čolaković also “applauded Seychelles’ high ranking on the Human Development Index internationally and for its position in Africa in spite of having undertaken a series of difficult economic reforms”, adds the statement.

For her part Ambassador Potter expressed condolences and solidarity on behalf of the people of Seychelles for the severe losses suffered by Bosnia and Herzegovina during the recent heavy flooding in the Balkans, which has claimed the lives of 24 of the country’s citizens, forced hundreds of thousands to flee their homes and incurred hundreds of millions of dollars’ worth of damage.

Both countries have indicated that bilateral collaborations on issues of mutual concern will continue.