In one week, Trump shakes up Washington and the world 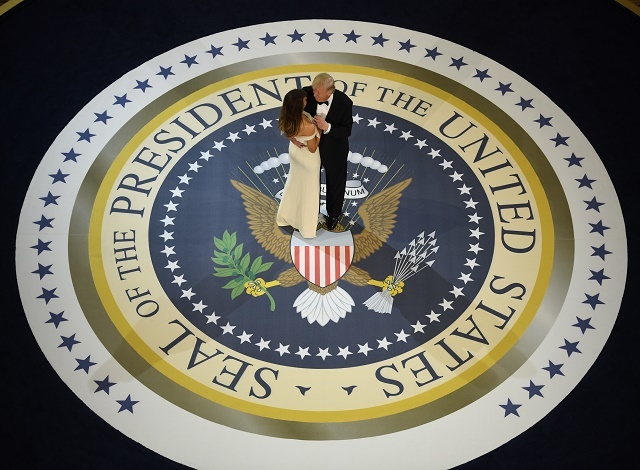 US President Donald Trump and the first lady Melania Trump dance at the Armed Services ball at the National Building museum following Donald Trump's inauguration as the 45th President of the United States, in Washington, DC, on January 20, 2017. (JIM WATSON / AFP)

(AFP) - Donald Trump hurtled through his first week in power, punching out at critics, dishing up "alternative facts," polarizing public opinion and making good on an electoral promise to shake up Washington.

One week into the Trump era and there is a serious case of political whiplash in America's capital.

Just a week ago, an outsider who never before held elected office rode into town. Seven days later, norms and doctrine that have guided the United States for decades are being re-examined.

Trump's down-to-the-studs gut job began with a feisty inaugural address: a call to arms that tested old distinctions between left and right.

"Today, we are not merely transferring power from one administration to another or from one party to another," he said.

"We are transferring power from Washington, DC, and giving it back to you, the people."

The establishment "elites" in big cities, in politics and the media were no longer the technocrats in charge of the world's only superpower, they were the enemy.

The new president also put the rest of the world on notice.

For the last 75 years, America had been what Barack Obama described as the "indispensable nation" -- the glue that bound the global order.

Barely 20 minutes into his four-year term, anyone who was listening had their answer.

Before arriving to the Oval Office, Trump's strategists had decided to use the first few weeks to unleash a daily wave of executive orders.

The aim was to unbalance opponents, define Trump as a man of action and slake his supporters' thirst for change.

For much of middle America, globalization, automation and the Great Recession had been apocalyptic.

Politics had passed them over and worse, they felt steamrollered by "coastal elites" in America's "culture wars" over abortion, gay rights, immigration, global warming and religion.

Trump had won the election by promising to be their champion, and he was going to -- as Ronald Reagan said -- "dance with the one that brung ya."

For the most part, the CEO-in-chief put forward actions that could have come from any Republican in the country: defunding abortion, preening the military and approving oil pipelines.

But it was coated with a thick veneer of nationalist and populist rhetoric, and accompanying policies championed by top aide Steve Bannon.

Trump ripped up a trans-Pacific trade deal designed to counterbalance China's regional economic power, imposed a ban on refugees from Syria and migrants from seven other Muslim countries.

He ordered planning to begin to build a wall on Mexico's southern border and picked a very public fight with Mexico's president Enrique Pena Nieto, who cancelled a trip to Washington.

The United States, a nation founded by migrants, was now willing to shut its doors.

Not since Obama's election or perhaps the Iraq War has America's image around the world changed so dramatically and so quickly.

But Trump supporters saw an outsider sticking up for them and sticking it to the elites.

"Get used to it," said Trump aide Kellyanne Conway, boasting that Trump had delivered a "shock to the system."

"And he's just getting started," she said.

But it was not all positive for Trump. The White House is far from purring. Key positions have yet to be filled and the decision making process is haphazard.

Trump aides were forced to publicly row back suggestions of a 20 percent border tax on Mexican goods and defend a chaotic rollout of the refugee and migrant ban.

Throughout the week, Trump engaged in intemperate outbursts about the size of his inaugural crowd, alleged election fraud and perceived media persecution.

Privately, in call after call, he complained to top aides about press coverage. The impression was of a man focused on his image more than running the country.

Trump also seemed like a a man for whom becoming US president was not adulation enough.

Spokesman Sean Spicer -- between tirades and missteps -- offered a window onto the soul of the White House.

"There's this constant theme to undercut the enormous support he has," Spicer said.

"It's unbelievably frustrating when you're continually told it's not big enough; it's not good enough. You can't win."

According to a Quinnipiac poll, Trump's approval rating at the end of his first week stood at 36 percent.

But critics saw a more sinister motive for the outbursts, particularly Trump’s unsubstantiated claim that three million people voted illegally in the election.

Brian Klaas, an expert on global democracy at the London School of Economics, sees Trump "casting aspersions (without evidence) on electoral integrity is a key way to restrict voting rights and erode confidence in elections."

"Attacking the media and blurring the lines of truth with state narratives not grounded in fact is important to sowing public doubt," he said.

General » Be a reporter: Write and send your article » Subscribe for news alert
Tags: US, politics, Trump