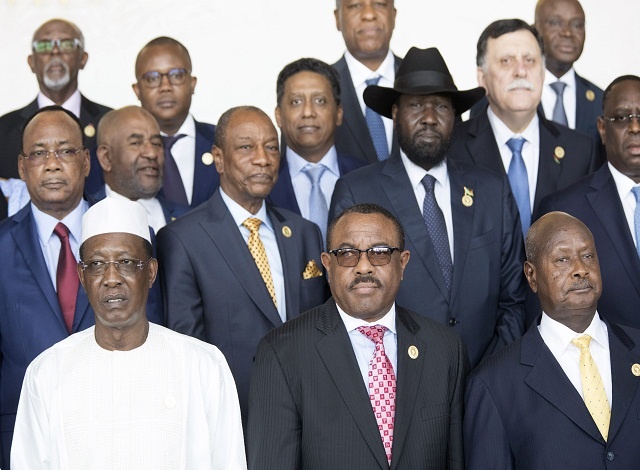 African Heads of State pose for a group photo ahead of the start of the 28th African Union summit in Addis Ababa on January 30, 2017. (Zacharias ABUBEKER / AFP)

(AFP) - The African Union decided Monday to allow Morocco back in the fold after a 33-year absence, despite stiff resistance from some member states over the status of Western Sahara.

After an emotional and tense debate, member states decided by consensus to leave the question of the disputed territory of Western Sahara for another day, and resolve it with Morocco "back in the family."

"From the moment that Morocco did not impose conditions ... we take their word for it and accept that Morocco be admitted to the African Union," said Mohamed Salem Ould Salek, foreign minister of the Sahrawi Arab Democratic Republic (SADR), which claims sovereignty over the entire territory of Western Sahara.

Morocco quit the then Organisation of African Unity (OAU) in 1984 after the bloc admitted the former Western Sahara as a separate member.

Some had feared Morocco would demand the expulsion of the SADR as a precondition for its own return to the AU.

Morocco maintains that the former Spanish colony under its control is an integral part of the kingdom, while the Polisario Front, which campaigns for the territory's independence, demands a referendum on self-determination.

Salek said that having Morocco in the same room would allow the SADR to pressure them into fulfilling their obligations and allowing a referendum in accordance with a 1975 decision by the International Court of Justice.

"Now (if) Morocco is blocking (it) will be questioned by the head of states: why are you afraid of a referendum? "Why don't you allow the Sahrawi to choose their future freely?"

Delegates attending the summit in the Ethiopian capital described an emotional and tense discussion, with heavyweights like Algeria and South Africa against the re-admission of Morocco.

"Morocco is now a full member of the African Union. There was a very long debate but 39 of our 54 states approved the return of Morocco, even if the Western Sahara question remains," Senegalese President Macky Sall told journalists.

"As we have said, if the family grows bigger, we can find solutions as a family," he added.

Morocco has been angling to return to the AU for several years and King Mohammed VI formally announced his intention to do so in July last year. Since then he has criss-crossed the continent lobbying for support.

Morocco is increasingly looking southwards to expand its economy and has realised it cannot drive an agenda on the continent without being in the AU, observers say.

The membership of affluent Morocco -- the sixth biggest economy in Africa -- could be a boon for the African Union, which lost a key financier in late Libyan dictator Moamer Kadhafi and is working on ways to become financially independent.

The 28th African Union summit began with the swift election of Chadian Foreign Minister Moussa Faki Mahamat, 56, as the new chairperson of the AU Commission, beating four other candidates.

Faki won in a final battle against his Kenyan counterpart Amina Mohamed after seven rounds of voting, the Kenyan government said in a statement.

Faki, a former prime minister, has been at the forefront of the fight against Islamists in Nigeria, Mali and the Sahel and has promised "development and security" will be top of his agenda as chief of the 54-member continental bloc.

Meanwhile Algerian diplomat Smail Chergui was re-elected to the key post of peace and security commissioner.

Faki takes over from South Africa's Nkosazana Dlamini-Zuma who is credited with advancing women's issues and moulding the ambitious Agenda 2063, but is seen to have dropped the ball on peace and security.

The choice of a new leader is crucial for the future of a bloc which is undergoing deep introspection on how to reform to become more relevant and better respond to crises on the continent.

Tasked with leading the reforms, Rwanda's President Paul Kagame delivered a "biting" report to heads of state on Sunday, according to a statement from the Kenyan government.

He criticised "chronic failure to see through African Union decisions (which) had resulted in a crisis of implementation and a perception that the AU was not relevant to Africans".

Kagame also slammed "over-dependence on (donor) funding" which accounts from 70 percent of the AU budget, according to the Institute for Security Studies.

The AU is also grappling with its relationship with US President Donald Trump's administration, sounding the alarm over an immigration ban affecting three African nations.

"The very country (where) our people were taken as slaves... has now decided to ban refugees from some of our countries," outgoing AU Commission chair Nkosazana Dlamini-Zuma told some 37 heads of state and leaders from across the continent.

"It is clear that globally we are entering very turbulent times," she added.

Africa » Be a reporter: Write and send your article » Subscribe for news alert
Tags: AU, summit