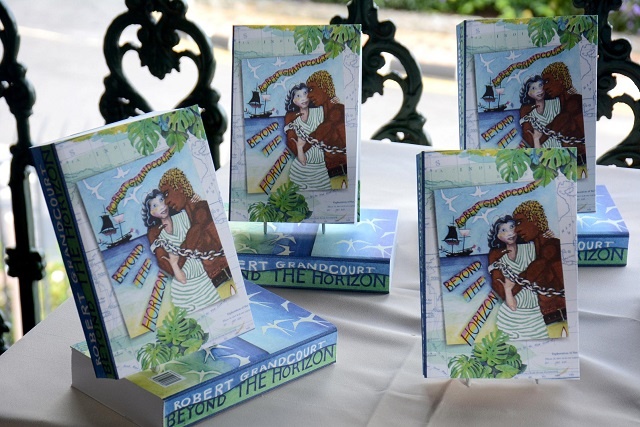 (Seychelles News Agency) - A tale of love, suffering and sadness coupled with the racial norms of the early settlers is chronicled in a new book written by a Seychellois author that was launched Tuesday at the mayor of Victoria’s office.

‘Beyond the Horizons’ was written by Robert Grandcourt, a resident of Praslin, the second-most populated island of Seychelles, an archipelago in the western Indian Ocean.

The book -- a work of fiction inspired by true events -- weaves the tale of shipwrecks, kidnappings, heroism and injustice which happened among the palms of the Seychelles islands.

“To write the book, I have been inspired by the conversations of my mother and the washerwomen of Praslin relating the tales of their origins as they soaked, rubbed and rinsed the family clothes,” said Grandcourt.

The author said that writing the book had been an eye-opening journey that gave him the opportunity to relive and share the joy, pain, motivation and survival strategies of the courageous men and women who ended up on the shore of Seychelles willingly or by force.

A close friend of Grandcourt, Roger Mancienne gave a short synopsis on the book. Mancienne said the story reflects the forced transposition and exile which our ancestors endured, while they continued to dream of a return to Africa, but at the same time gradually accepting the islands as their home.

“In this book, we can see Seychelles from the view of two women: one snatched from Africa to slavery and the other the daughter of a slave owner and privateer,” Mancienne said.

He added that “Without the knowledge of the past, which the book is about, a nation is like a tree without roots: one which does not live and does not bear fruit.”

The book’s cover showing a black male slave in chains embracing a white woman, an act that was not acceptable in those times, was drawn by a well-known artist in Seychelles, Michael Adams.

‘Beyond the Horizon’ can be purchased at Antigone bookshop in Victoria, the Seychelles' capital, for $24 (Seychelles Rupees 325) and other bookshops across the islands.

'Echoes from the Oasis' preserving Seychelles’ past in novel form