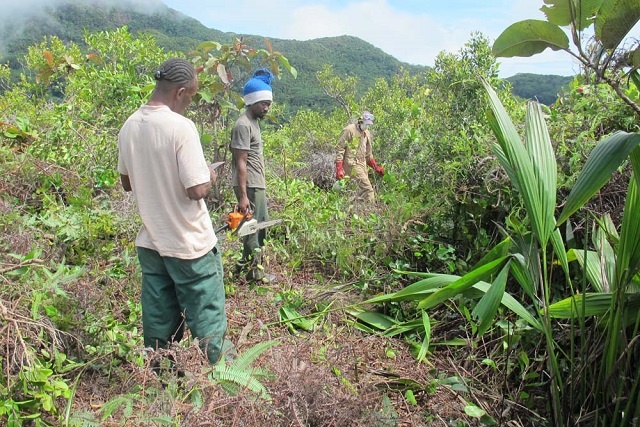 (Seychelles News Agency) - A new study carried out in Seychelles and published in the prestigious scientific journal Nature on Monday has shown that clearing areas of alien species increases the natural pollination among the native plants that remain.

The increased productivity of native plants recorded by the researchers is an indicator that natural ecosystems of native and endemic plants can be restored, a promising implication for the future of biodiversity conservation.

Conservation biologist Christopher Kaiser-Bunbury, from the Technical University of Darmstadt in Germany, has worked on a number of research projects in the western Indian Ocean archipelago, and this most recent study, entitled "Ecosystem restoration strengthens pollination network resilience and function" involved close collaboration with the Seychelles National Parks Authority (SNPA) to monitor differences in pollination levels at eight isolated mountaintop areas. Four of these areas had all its alien shrubs removed, while the other four remained unchanged.

Over the next eight months, the team monitored and compared the results, discovering that the removal of exotic plants appeared to improve pollination. In the restored sites, plants produced 17.4 percent more flowers and attracted 22.9 percent more visits from pollinators, thereby increasing the numbers of fruit produced.

The researchers also found that the total number of pollinators present, including bees, wasps, flies, butterflies, moths, beetles, birds and lizards, was on average 21.6 percent higher in restored ecosystems 6 to 14 months after exotic species were removed - proving the project’s long-lasting effects.

Speaking to SNA in an email interview, Kaiser-Bunbury explained that the long-term survival of native plant communities does not only depend on the presence or absence of exotic plants, but also whether the associated animals are present and provide vital ecosystem functions.

“Most plants cannot reproduce without pollinators,” he stated. “Despite the importance of these plant-animal interactions for the success of restoration efforts, we did not know whether restoration through the removal of exotic plants actually resulted in the restoration of the associated pollinator communities.”

The SNPA initially proposed to remove exotic species from several sites in the mountains of the granitic islands of the Seychelles, but needed to find out if this resource-demanding activity would ultimately be successful in the long term.

Having worked together with the SNPA’s field researchers, James Mougal, Terence Valentin and Ronny Gabriel, on a previous study Kaiser-Bunbury led in 2007, the group proposed to co-author this study together as well.

Keeping the weeds out

The next step was to identify the eight study sites, which needed to be mid-altitude glacis (granitic inselbergs), around a hectare in size, with similar ecological and climatic conditions that were relatively easy to access, and the sites were selected on the main island of Mahé at Bernica, Casse Dent, Copolia, La Reserve, Salazie, Rosebelle, the Tea Plantation and Trois Frères.

“We used a combined removal method where trees/bushes were cut with machetes, chain saw or long secateurs and afterwards the remaining stumps were treated with a systemic herbicide,” explained Kaiser-Bunbury. “The work was extremely labour-intensive, requiring much skilled manpower.”

As Kaiser-Bunbury pointed out, vegetation restoration is not a simple exercise - it requires a long-term commitment to ensure the sites are kept clear of invasive species. To counteract the impact of removing exotic shrubs and trees on the habitat, restoration also involves reforestation with native plants and regular weeding.

“We know from work in Mauritius that exotic species removal can be very successful for native biodiversity if well maintained,” he stated. “With this project we managed to clear the vast majority of the glacis of exotic plants and establish a nature trail to facilitate access to local and international visitors.”

After the restoration part of the project was completed, the researchers spent a total of 1,525 hours counting flowers by following a transect-based protocol which allowed them to calculate the number of flowers available at each study site every month.

“In addition we spent several days per month recording fruit production and trees and recorded other parameters that we needed for the study,” said Kaiser-Bunbury. “The work started in September 2013 and we finished at the end of April 2014. During these eight months the teams were on the mountains daily, and during the night to collect data on nocturnal pollinators.”

Taking out the competition

The study provides a tantalising theory as to why pollination increases after the removal of alien species. The researchers think it most likely that the removal of exotic plants opens up the native vegetation and allows the pollinators to find native flowers more easily and quickly. With more pollinators visiting each flower and each pollinator visiting a flower carrying better pollen, the result is a higher chance of fruit production.

As Kaiser-Bunbury explained, native plants, many of which are found only in the ecologically unique Seychelles islands, are the cornerstone for the archipelago’s rich biodiversity, and tropical biodiversity in general.

“Before human colonisation all species were native or endemic, and their traits evolved together, resulting in highly adapted life conditions,” he said. “All endemic animals live best in close association with native plants. Without native plant communities the islands would lose not only a tremendous ecological value but many ecosystem services, which all people in Seychelles depend on.”