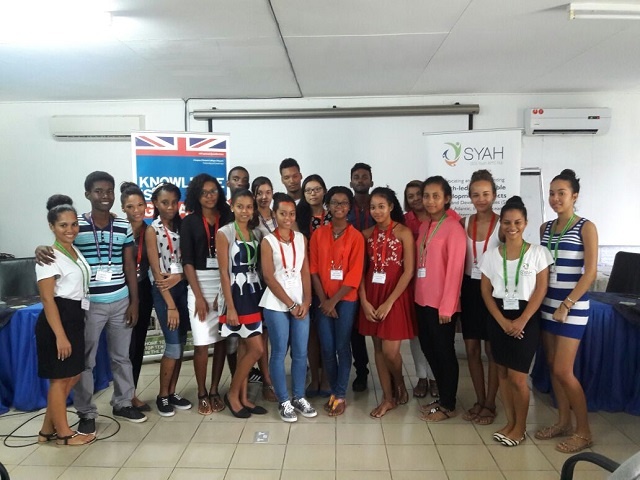 A group of 20 underwent the first phase of the ‘Prosperity & Environment: Promoting development opportunities for youth in the Blue Economy. (SYAH)

(Seychelles News Agency) - A batch of hopeful young Seychellois students from Mahe, Praslin and La Digue have embarked on a journey that could secure their future careers using the sustainable ocean development concept known as the ‘Blue Economy’.

The group of 20 underwent the first phase of the ‘Prosperity & Environment: Promoting development opportunities for youth in the Blue Economy’ initiative last month spearheaded by the SIDS Youth AIMS Hub - Seychelles (SYAH) and funded by British High Commission.

The programme was designed to enable youth between the ages of 16 and 24 to follow a two-week internship in one of 14 organisations in the Seychelles, an archipelago in the western Indian Ocean. Aside from gaining first-hand work experience, the Blue Economy interns were able to better understand the diversity of work undertaken, as well as the career options available in the Blue Economy.

Following the two-week internship period, the group then proceeded on a nine-day fully funded trip to Mauritius as ‘Blue Economy Champions’ where they joined fellow students from Mauritius to learn more about the variety of mechanisms that are already being used in the western Indian Ocean region to sustainably develop the ocean economy.

The group was warmly welcomed by Mauritian organisations such as the University of Mauritius, WISEOCEANS, Indian Ocean Rim Association, the Environmental Protection and Conservation Organisation, Reef Conservation and the Mauritius Oceanography Institute.

The visitors got to find out more about regional cooperation for developing the Blue Economy, such as surveillance activities to monitor illegal fishing activities in the island nations’ vast Exclusive Economic Zones (EEZs) and the wide range of marine-related fields of study offered by the University of Mauritius.

“We learnt that the Blue Economy concept is not so different between Seychelles and Mauritius. However, Mauritius is more advanced in terms of scientific research such as using ocean resources to find cures for cancer, whereas Seychelles leads in creating awareness of the importance of the ocean and protecting it,” stated 21-year-old Blue Economy champion Ryan Dewea.

Sarah Purvis, 16, said that the lack of funding for Blue Economy development projects remained a major obstacle for both Seychelles and Mauritius, although she believes Seychelles receives more governmental involvement and support than its neighboring countries. “The visit to Mauritius... helped me to better appreciate what I already have,” she told SNA.

Their fellow ambassador, 17-year-old Laura Montano, added: “Visiting Mauritius has been very insightful as everyone we met brought with them their own perspective. It is crucial to realise that as SIDS [small island developing states], the ocean without us will thrive but without the ocean we will die.”

Throughout the programme the Blue Economy champions published blog posts on SYAH’s website, in order to share all they had learned.