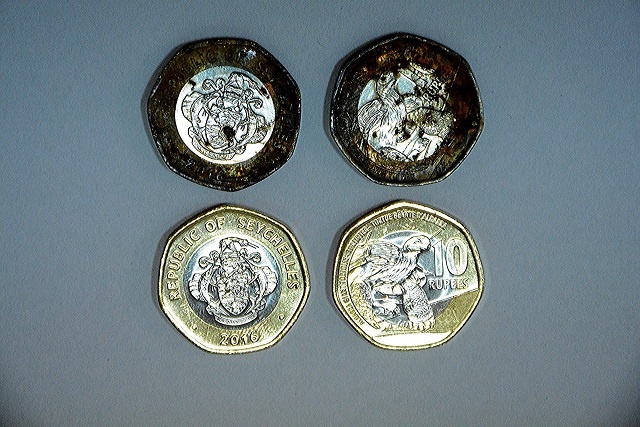 (Seychelles News Agency) - The Central Bank of Seychelles said on Friday that it has sent rusted 10 rupee coins to the UK for analysis.

The head of the banking services, Mike Tirant, said authorities received reports of the damaged 10 rupee coins in December last year and started collecting them.

The coins have been sent to the Royal Mint to determine what has caused them to rust barely a month after they were put into circulation. Tirant said the important thing is to establish how it happened.

“Has it happened during production process or is it something or an element that the coins have been exposed to, and whether all 10 rupees coins are affected or if it is just a batch," he said.

Preliminary results are expected in by mid February.

The Central Bank of Seychelles has refuted the possibility that the coins, made to replace the ten rupee notes, might be counterfeit.

“For Seychelles we do not expect counterfeits with the 10 coins. The value is too low for someone to try and counterfeit, and the samples we have collected so far are all genuine Central Bank coins which we have put out in circulation, “ said Tirant.

The Royal Mint is a company that the Central Bank has been working with since 1982. It has the expertise to determine why the coins are rusting.

The metal used to produce coins is nickel plated steel and normally does not rust. However rust can occur depending on what element the coin has been exposed to. The material which is brass coated is yellow in colour.

The new 10 rupee coin is made of the same material like the one cent, five cents and ten cents coins used in the currency of Seychelles, a group of 115 islands in the western Indian Ocean.

Around 600,000 of the 10 rupee coins were put into circulation from early December last year. The Central Bank has collected some 150 damaged coins.

Further production of the coin has been suspended pending investigation.

The Central Bank is advising any one with the damaged coins to bring them to the bank in the country’s capital Victoria.