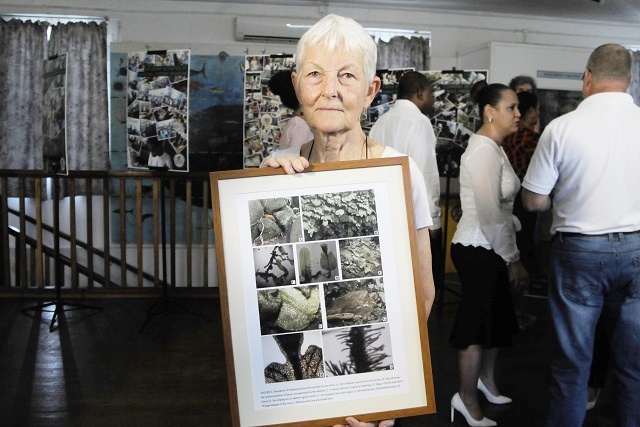 Katy Beaver honoured for her extensive contribution toward the study of plants in Seychelles. (Patrick Joubert, Seychelles News Agency)

(Seychelles News Agency) - Seychelles' natural history museum honoured one of its former colleagues by giving her name to an endemic fern of Seychelles last week.

The new fern is called "fouzer Kati" (Katy’s fern in English) in honour of Katy Beaver for her extensive contribution toward the study of plants in Seychelles, popularising scientific research and developing educational material for children and young researchers.

Beaver told reporters, “It is a great honour to have a Latin name given to a plant after yourself. Something that really pleases me is that it is a very small fern, almost microscopic. That suits my nature quite well.”

The fouzer kati grows between 300 and 500 metres above sea level in sub-mountain ravines, although it is can also be to a lesser extent at elevations as low as 100 metres.

The fern is common on Mahe, the main island, and Silhouette, the third-largest island.

The curator of the herbarium at the Seychelles natural history museum, Charles Morel, said that “when Katy made the decision to retire, we came to an agreement that as part of her parting gift, it was the right time to name a plant after her.”

Morel added that whenever a new species is discovered, the herbarium names it after someone who has contributed greatly to the conservation of the environment.

“The fern is one of the smallest known existing in the fern family, with leaves of around 5 millimeters,” said Morel.

‘Fouzer Kati’ was discovered in 2013 by Bruno Senterre, a Belgian biologist and ecologist working part-time at the local herbarium during an assessment of the key biodiversity areas as part of a consultancy with the United Nations Development Programme (UNDP).

The discovery was followed by literature reading, studies, researches and write ups.

“All these procedures lasted for over two years. The samples sent to the Natural Historic Museum of Paris were confirmed as a new species,” said Morel.