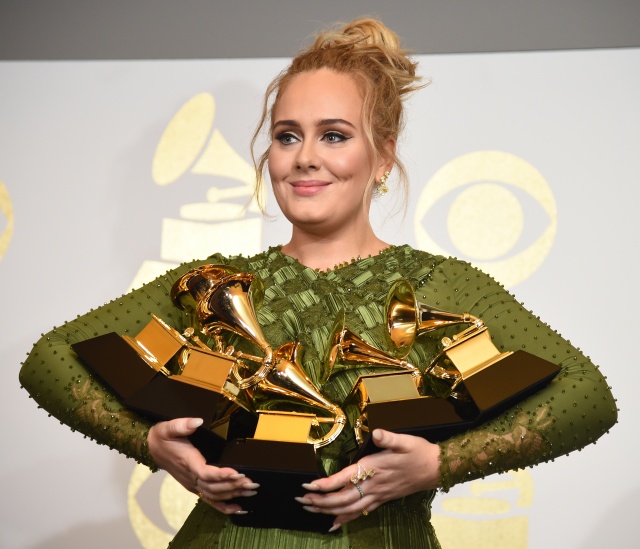 Adele poses in the press room with her trophies, including the top two Grammys of Album and Record of the Year for her blockbuster hit "Hello" and the album "25", during the 59th Annual Grammy music Awards on February 12, 2017, in Los Angeles, California. (Robyn BECK / AFP)

(AFP) - Adele on Sunday triumphed once again at the Grammys with five awards for her latest blockbuster album of ballads, but she used her moment in the sun to heap praise on Beyonce, whom she bested for top honors.

The English balladeer swept up the trio of major prizes at the music industry's biggest night -- Album, Record and Song of the Year -- along with two other pop awards. Beyonce walked away with two trophies.

And in a sentimental homage to late rock icon David Bowie, his final album "Blackstar" earned five awards, including four posthumous prizes for the singer.

Adele, who has stood by her winning style of heart-wrenching songs of loss and regret, became the first act ever to sweep the three key categories in two different years.

Fighting back tears, Adele took the podium and paid tribute to Beyonce, who had led the night's nominations with nine for her politically edgy "Lemonade."

"My idol is Queen Bey and I adore you. You move my soul every day," Adele said as she looked at Beyonce, who was making her first public appearance since announcing she was pregnant with twins.

She hailed Beyonce's album as "monumental and so well thought out, and so beautiful and soul-baring," suggesting it should have won, bringing her rival to tears.

Speaking to reporters after the show, Adele said she had been worried "25" would flop: "I didn't really find my voice, and I don't know if I did find it even at the end."

It was a happy ending to a night that included a major embarrassment as Adele -- using an expletive that was cut from the television broadcast -- insisted on restarting "Fastlove," her tribute to late pop icon George Michael.

It was the second straight year of hiccups for Adele after a microphone fell on the piano during her Grammy performance a year ago.

Shortly afterwards on Sunday, Metallica frontman James Hetfield discovered that his microphone was off as the band played with Lady Gaga -- who transformed into a metalhead, dancing ferociously before stage-diving.

Beyonce won only for Best Urban Contemporary Album for "Lemonade" and Best Music Video for "Formation."

The video marked the most political statement of Beyonce's career as she rallied behind the Black Lives Matter movement with imagery of police officers surrendering as if under arrest.

Reflecting her increasingly experimental side, the 35-year-old singer's Grammy performance was a New Age-inspired celebration of motherhood.

With hints of India and ancient Egypt, Beyonce -- in a golden crown and cape -- sang two new songs as dozens of female dancers surrounded her with flowers and a spoken word incantation lauded the power of women.

Accepting one of her awards, Beyonce said "Lemonade" and the accompanying film were meant to "give a voice to our pain, our struggles, our darkness and our history -- to confront issues that make us uncomfortable."

"It's important to me to show images to my children that reflect their beauty so they can grow up in a world where they look in the mirror -- first through their own families, as well as the news, the Super Bowl, the Olympics, the White House and the Grammys -- and see themselves, and have no doubt that they’re beautiful, intelligent, and capable," Beyonce said in one of the night's more subtle political comments.

The evening saw its most forceful statement as rapper Busta Rhymes took the stage with hip-hop pioneers A Tribe Called Quest and emerging artist Anderson .Paak.

Denouncing US President Donald Trump for his efforts to curtail immigration, Busta Rhymes mocked "President Agent Orange" and shouted, "We come together! We the people!"

"Blackstar" -- the final album of Bowie, who always enjoyed more recognition in his native Britain -- won in all five categories for which it was nominated, including Best Rock Song and Best Alternative Music Album.

Bowie had won only one Grammy in his lifetime before Sunday.

And "Blackstar," which he released two days before his death last year from an undisclosed battle with cancer, was controversially passed over for Album of the Year honors.

Bowie showed himself innovative to the end by collaborating with the avant-garde jazz saxophonist Donny McCaslin.

While not predicting how Bowie would have felt, McCaslin told reporters: "When the press was hearing the album before it came out, I could see it meant a lot to him."

Bruno Mars electrified the crowd with a tribute to Prince, uncannily channeling the late pop icon by donning a purple jacket and playing a guitar solo to "Let's Go Crazy."

The performance marked a new commercial effort by the estate of Prince -- who famously rejected music industry conventions -- with his classic albums on Sunday returning to major streaming sites.

General » Be a reporter: Write and send your article » Subscribe for news alert
Tags: Entertainment, US, music, Grammy