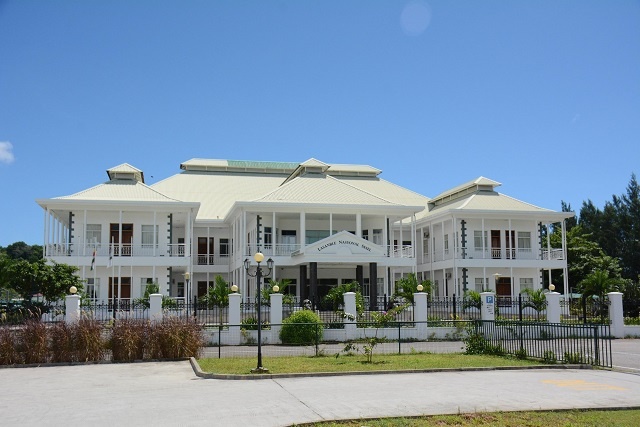 (Seychelles News Agency) - The two leaders in the Seychelles’ National Assembly on Thursday gave their responses to the president’s State of the Nation address that he delivered this week.

Leader of the Opposition

Wavel Ramkalawan applauded the address, saying that President Danny Faure did not insult anyone and recognised the difficult situations that the people in Seychelles are in today.

“(The president) was frank and admitted that the sixth National Assembly, with an LDS majority, is doing what the constitution is asking from them and they are also helping to move the country forward,” said Ramkalawan.

He congratulated the president for finding the courage to apologise to the inhabitants of La Misere, a sub-district of Grand Anse in the west of Mahe, and to accept that it was a mistake to close down NIE [National Institute of Education].

When addressing the concerns that the president had outlined, Ramkalawan said: “If we had the spirit of listening, accepting participation and the ideas of others and putting the well-being of the people first, the issues in regards to housing, education, drug, alcohol and poverty would not have been subjects of national concerns.”

On the issue of drug use, Ramkalawan said, “It is a mission that we should all be involved in. I know that the biggest excuse being used is that it is difficult to bring forth evidence against them (the drug barons) and this excuse is not valid anymore.”

Ramkalawan added that detailed investigation should be carried out and the properties of such people and their incomes looked into, and from there defined actions should be taken.

The Leader of the Opposition also talked about the issue of alcohol use and abuse, and said that “maybe it is about time that we start placing taxes on alcohol based on the alcohol percentage.”

Ramkalawan agreed to the president’s order to close the Marie-Louise prison and asked that the prison is closed before June.

The Opposition Leader did not accept some of the proposed solutions of President Faure.

“When he talked about the tunnel between Cascade and Grande Anse, Mahe or between Beau Vallon and Glacis, I do not see this as an immediate priority. A good plan to control traffic in the capital is an urgent matter,” said Ramkalawan.

He added that he is against the construction of a third lane on Francis Rachel Street, as this will destroy the ‘L’esplanade’ a landmark in the capital, Victoria.

Ramkalawan also talked about corruption which he said was not touched during the State of the Nation address.

“This remains a subject that is affecting the country,” said Ramkalawan.

Charles De Commarmond started his response to the State of the Nation Address, in saying that President Danny Faure presented an inclusive approach to tackling social ills, such as substance abuse, and other challenging issues relating to land use, education and health, which our society is currently facing.

De Commarmond said that it is up to each ministry, minister, principal secretary and chief executive to be proactive and to take action in a more responsible manner.

“For instance take the issue of public access to the beach, this is a planning issue. Why have such decisions been taken? Some people in government make bad decisions which in turn makes us and the government look bad,” the Leader of Government Business said.

He said that the many propositions were brought and discussed in the previous National Assembly but so far the ministries concerned have not taken appropriate actions.

“What are they waiting for, for the President? It is clear that some policies need changing and we need to make them now, we cannot wait for tomorrow,” said De Commarmond.

The Leader of Government Business gave the example of decisions taken by the cabinet of ministers three years ago which are still not implemented.

“We have a problem with the execution of decisions, and this frustrates people, we must do things quickly and now,” he said.

De Commarmond called on government agencies to act more responsibly, be prompt and innovative, and facilitate the work of President Faure.

He also urged greater cooperation from the private sector especially the finance sector.

De Commarmond commanded the appointment of the all-Seychellois senior officers, who will now lead the National Drug Enforcement Agency (NDEA), adding that there is a need for the country to look at the use of softer drugs in a different way.

Those of other members will follow the responses of the two leaders in the National Assembly.