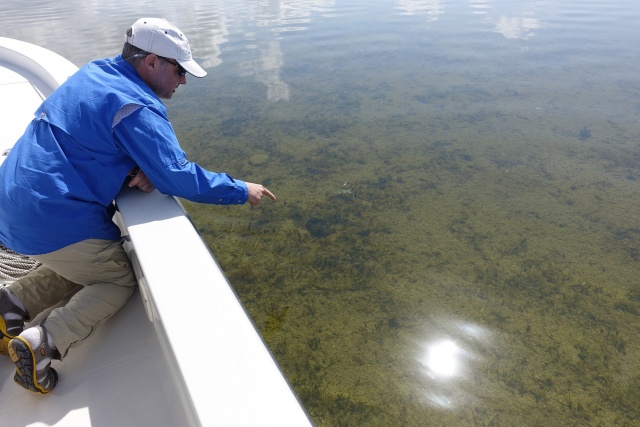 Wetland ecologist Steve Davis of the Everglades Foundation inspects the waters of Whipray Basin On April 13, 2016, in the Florida Bay where seagrass is dying, erasing an important habitat for young fish and threatening the livelihoods of fishermen in the Florida Keys. Decades ago, the sight of seagrass swaying beneath the waters off south Florida conjured romance for those who dangled their fishing lines in hopes of catching redfish, snook or mangrove snapper."My father used to talk about the grass looking like a woman's long hair flowing in the water. It was just a beautiful sight," said fishing guide Steve Friedman.
But now, seagrass is dying at a rate unseen since the late 1980s in the Florida Bay, off the southern tip of Florida between the Atlantic Ocean and the Gulf of Mexico. (Kerry SHERIDAN / AFP)

(AFP) - Underwater meadows of seagrass offer important protection against pollution to both humans and coral reefs, but are in jeopardy worldwide due to climate change, sewage and agricultural runoff, researchers said Thursday.

Places with healthy seagrass -- where sponges, clams, small fish and other filter feeders thrive -- can reduce bacteria that is harmful to both people and marine life by up to 50 percent, said the study in the journal Science.

Corals located near seagrass meadows showed about half as much disease as those further away from these protective ecosystems, said the findings, presented in Boston at the American Association for the Advancement of Science annual meeting.

"The seagrass appear to combat bacteria, and this is the first research to assess whether that coastal ecosystem can alleviate disease associated with marine organisms," said lead author Joleah Lamb of Cornell University.

The idea for the study began when senior author Drew Harvell, a Cornell professor of ecology and evolutionary biology, was leading an international workshop to examine the health of underwater corals at Spermonde Archipelago in Indonesia.

Within days, the entire research team fell ill with dysentery, and one scientist came down with typhoid.

"I experienced firsthand how threats to both human health and coral health were linked," Harvell told reporters at the AAAS conference.

"It occurred to me that if we could show that humans as well as corals are at risk from wastewater pollution, and show the role of seagrass ecosystems services in cleanup, it would help create incentives to preserve these valuable ecosystems."

So researchers returned to test the waters in the same area, a region where freshwater is sparse and solid waste, sewage and wastewater pollution are rampant along the coasts because people do not have septic systems.

Researchers tested for Enterococcus bacteria, a standard for assessing health risk established by the US Environmental Protection Agency.

"In shorewaters, the researchers found the presence of the bacteria Enterococcus to exceed the US EPA recommended human health risk exposure level by 10-fold," said the study.

But in water collected from within seagrass meadows, researchers found levels of Enterococcus were reduced three-fold.

"The beautiful oceanside water looked blue-green, but truly it was filled with dangerous pollution - some really bad stuff in the water close to shore," said Harvell.

Globally, seagrass meadows are declining by about seven percent each year since 1990, researchers said.

"It is a bit ironic that in a seagrass bed -- although beds have great powers to clean the water -- they cannot filter a pathogen that actually kills them," Harvell said.

Although some conservationists have made efforts to re-plant lost seagrass, such projects are difficult and don't work well, researchers said.

Lamb said the only way to really protect these vital underwater meadows is to reduce the human-driven threats that cause them to die, including global warming, pollution, sewage and development.

"Hopefully this research will provide a clear message about the benefits of seagrasses for human and marine health that will resonate globally," said Lamb.

Co-authors on the study came from the Centre Scientifique de Monaco, the Australian Institute of Marine Science, James Cook University in Australia and Hasanuddin University in Indonesia.

General » Be a reporter: Write and send your article » Subscribe for news alert
Tags: environment, fishing, ecosystem, water, US, Indonesia