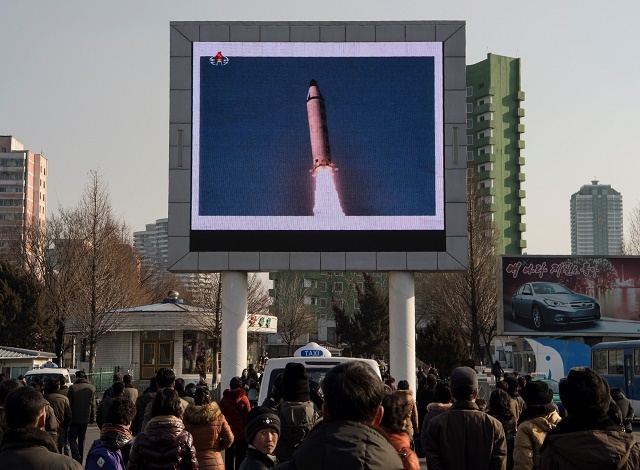 This photo taken on February 13, 2017 shows people in Pyongyang watching a public broadcast about the launch of a surface-to-surface medium long-range ballistic missile Pukguksong-2 at an undisclosed location on February 12. The UN Security Council on February 13 unanimously condemned North Korea's latest ballistic missile test as US President Donald Trump vowed to deliver a strong response to the provocation. (KIM Won-Jin / AFP)

(AFP) - China will suspend all imports of coal from North Korea for the rest of the year, Beijing said Saturday, depriving Pyongyang of a crucial source of foreign exchange following its latest missile test.

"(China) will temporarily stop its imports of coal from North Korea for the rest of this year (including coal for which customs applications have been made but not yet processed)," the commerce ministry said in a statement posted on its website.

The statement said the suspension was in accordance with existing UN sanctions imposed on North Korea over its nuclear and missile programmes and would come in to force on Sunday and remain until the end of the year.

The decision came less than a week after North Korea's latest missile test, as tensions escalate over the reclusive state's defiance of UN resolutions.

The North's leader Kim Jong-Un has been trying to strengthen his grip on power in the face of growing international pressure over his country's nuclear and missile programmes.

China's announcement came as investigators in Malaysia probe the assassination of Kim's half-brother on Monday, which Seoul says was carried out by female agents on the orders of Pyongyang.

North Korea's launch came just after a conciliatory phone chat between US President Donald Trump and his counterpart Xi Jinping of China -- the North's only major ally.

That may indicate it was in part a North Korean attempt to sow division between China and the United States, which has pressed Beijing to bring more pressure on Pyongyang, said Wang Dong, an expert on Northeast Asian geopolitics at Peking University.

"So I think the provocative nature of that launch was very clear, that's why (China) has moved to register its opposition," Wang said.

"I think this can be viewed as a signal to North Korea that it has to restrain its behaviour."

Wang said he doubted the assassination of Kim Jong-Nam -- half-brother of Kim Jong-Un -- was a factor in Saturday's announcement by China since that crime was still being investigated by Malaysia.

On Wednesday Pyongyang defended the launch and slammed the Security Council's condemnation.

The rocket launch was the first since Trump came to power and was seen as a challenge to the new American leader, who has vowed a strong response.

US Secretary of State Rex Tillerson on Friday used his first meeting with Chinese counterpart Wang Yi to urge Beijing "to use all available tools to moderate North Korea's destabilising behaviour".

Pyongyang is barred under UN resolutions from carrying out ballistic missile launches or nuclear tests.

North Korea blasted off a series of missiles and conducted two nuclear tests in 2016 in its quest to develop a weapons system capable of hitting the US mainland.

The latest rocket -- said by Pyongyang to be able to carry a nuclear warhead -- flew east for about 500 kilometres (310 miles) before falling into the Sea of Japan (East Sea), South Korea's defence ministry said.

The Security Council has imposed six sets of sanctions since Pyongyang first tested an atomic device in 2006.

Beijing traditionally ensured that UN Security Council resolutions on sanctions against Pyongyang included humanitarian exemptions, and had continued to purchase huge amounts of North Korean coal -- $101 million worth in October alone -- a crucial source of foreign exchange for Pyongyang.

But the latest resolution, passed in December, had no such clause and Beijing suspended purchases of coal from the North -- for three weeks to December 31.