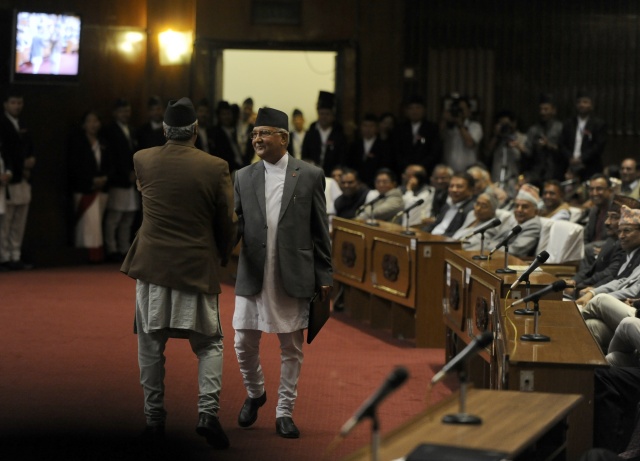 Nepalese caretaker Prime Minister KP Oli Sharma (C-R) and Congress president Sher Bahadur Deuba (C-L) shake hands during a Parliament session in Kathmandu on July 24, 2016. Nepal's K.P. Sharma Oli resigned as prime minister on July 24, minutes before facing a no-confidence motion in parliament he was certain to lose, plunging the impoverished nation into fresh turmoil. His political rivals, former Maoist rebels, called for the vote against Oli after they deserted his fragile ruling coalition, accusing him of reneging on past deals and following deadly unrest over a divisive new constitution. (PRAKASH MATHEMA / AFP)

(AFP) - Nepal will hold its first local elections in two decades in May, the government has announced, a key moment in the country's fraught transition to democracy.

The impoverished Himalayan nation emerged from a brutal decade-long civil war in 2006, which brought the end of the 240-year-old Hindu monarchy and transformed it into a secular republic.

But deep political divides have prevented it from implementing a new constitution that paves the way for elections, but which the minority Madhesi community says leaves them politically marginalised.

"The government has taken a historic decision. The election will be held in a single phase across the country," Prime Minister Pushpa Kamal Dahal said following a late night cabinet meeting on Monday.

"Election is compulsory for safeguarding all agendas and implementing the constitution for the functioning of democracy."

Local polls will be held on May 14, paving the way for provincial and then national elections later in the year.

The Madhesis, who live in the densely populated Terai plains bordering India, want the constitution to be amended first and have pledged to protest against the polls.

"We will not take part in the local level election without our demands being addressed," Mahindra Yadav, the chairman of a Madhesi political party, told AFP on Tuesday.

"The election cannot be a success unless we take part in it."

The Madhesis have long complained that the internal borders laid out in the constitution leave them under-represented at the ballot box and in the national parliament.

After the constitution was adopted in September 2015, Madhesi protesters kicked off a months-long blockade of the India-Nepal border that led to a crippling shortage of goods across the country.

An amendment to the constitution currently in parliament proposes to redraw some of provincial borders to address some of the Madhesi parties' demands.

"This is an achievement in a way but the problem is whether the Madhesi parties will be on board. If the Madhesi go for protest it will be impossible (to hold the polls)," Nishchal Pandey, director of the Kathmandu-based Centre for South Asian Studies, told AFP.

Local government representatives were last elected in 1997. Their five-year terms expired in 2002, at the height of the civil war, and their mandate was allowed to lapse.

Corruption has flourished since, hampering the delivery of basic services -- from healthcare to the appointment of teachers at government schools.