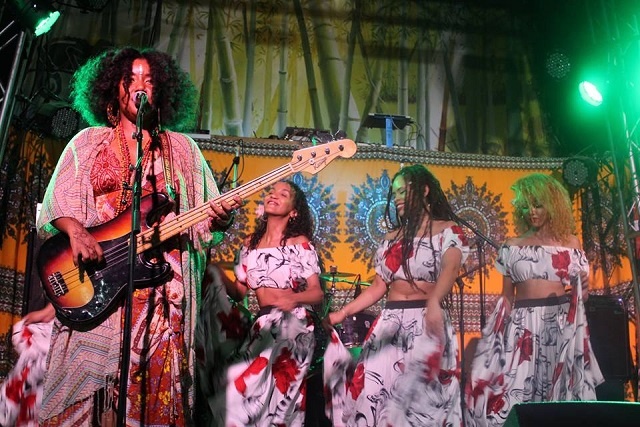 Grace Barbe is a Seychellois singer placing Seychelles on the map when she performs in various countries. (Nairobi Now)

(Seychelles News Agency) - Given the Seychelles’ tiny population and relative isolation from the mainland of Africa, it can be at times easily overlooked. However at this year’s Sauti Za Busara Festival in Zanzibar, Tanzania, the archipelago was placed firmly on the map when Seychellois musician and seasoned live performer Grace Barbé and her band took the stage.

Barbé had audiences from all over the region - and the rest of the world - dancing along to the vibe of her band’s enticingly unique style called ‘Afro-Kreol’, a colourful fusion of traditional Seychellois music with African percussion and reggae, pop, rock and Latin rhythms. The group of three were on a tour of several Eastern African events, including Afrikabisa, Bagamoyo, Tanzania on 29th January, the renowned Sauti Za Busara Festival, Zanzibar on the 9th of February and the Treehouse in Nairobi, Kenya on the 11th.

Grace Barbé, who was born on Mahe, the Seychelles' main island, relocated with her family to Australia at the age of 16. For the past decade, she has been playing bass guitar and singing in English, Creole and French, with British musician Jamie Searle playing lead guitar and her sister, Joelle Barbé on the drums. The band released their debut Album Kreol Daughter in 2008, followed by a second album ‘Welele!’.

SNA caught up with Barbé to find out about the reception to her music as well as her experience of visiting the area.

SNA: What prompted this tour and why East Africa?

GB: We received an invitation to perform at the prestigious Sauti Za Busara Festival in Zanzibar, Tanzania. The first time we were invited a couple of years ago we could not make the festival but we were invited again and didn't want to miss out this time. Sauti Za Busara is one of the biggest world music festivals in East Africa and so well regarded internationally. We couldn't miss out on the opportunity of being introduced and exposed to that market on a global scale. This was our first ever East Africa tour.

SNA: What was the reception like for your band and your Afro-Kreol style of music?

GB: The reception has been absolutely amazing and very positive. One can not sit down to our music, you have to get up and shake your coconuts… and the people did! The audience as well as the media really embraced our style. I suppose the Afro-Kreol style was fresh and unique. We were all very proud to be representing Seychelles.

SNA: You had a lot of different activities planned - what was the highlight for you?

GB: The highlight was definitely Sauti Za Busara itself - an incredible festival, with so many African countries and artists coming together as well as delegates from around the world. It's a great platform for all to connect, network and create new relationships and partnerships through music and culture. It is also a wonderful way to connect with other music promoters who are always searching for incredible emerging artists.

Nairobi was also a highlight. We spent no more than 24 hours in Nairobi, Kenya and performed for the Seychellois community as well as others outside of the community. It was incredible to see fellow Seychellois come out in full force to show their support. Everyone was curious and excited about the show, and it turned out to be a very successful night. A lot of people were saying they haven't danced this much in a long time, especially to a Seychellois artist, as they don't get that sort of show over there. This experience really made me realise the power of community when people come together and that night, they did!

SNA: Can you tell us more about your participation in the Sauti Za Barusa Fest in Zanzibar?

GB: We performed a 50-minute show on the opening night. During the set, I was able to talk about Seychelles, the culture, the language and the people. I talked about how women play an important role in shaping the family, community and society and how that needs to be embraced and respected. We come from a matriarchal society and we Seychellois women should feel empowered by the contribution we make to our society. My sister Joelle and myself were raised by a very strong and independent single mother and this has allowed us to follow our passion and to do it with strength, determination and a sense of pride. I talk about all this in between the songs while we are entertaining the crowd. I believe the performance should be educating as well as entertaining. That's what we are representing and it works well.

My guitarist Jamie Searle, who is also our musical director and an integral member of the band from the UK, glues everything together. Jamie's passion and contribution to African and Indian Ocean island music has allowed us to create this Afro-Kreol style on another level. With just three of us - drums, bass and guitar, we are able to produce a very powerful and distinctive sound. I also attended the music conference while there and did a lot of interviews with media from across Africa, as well as from Europe.

SNA: You did a few photoshoots in some picturesque locations - some with connections to the slave trade. Did you feel a special connection to be there?

GB: Very much so. I believe there is a deep connection between the Seychelles and East Africa because of the slave trade. This tour has opened my eyes and my heart. It has been a musical, cultural and spiritual experience. I felt connected to the land and interestingly, visiting Bagamoyo, which is a town about two hours drive out of Dar es Salaam, proved to be a heavy experience for me spiritually. There was still some sadness attached to the town of Bagamoyo, as if the effect of slavery was still lurking around. It was not scary though. This was a big contrast to Zanzibar which was full of life and very cosmopolitan. The water has passed under the bridge in Zanzibar while Bagamoyo is still recovering. Zanzibar is a beautiful touristic island. Bagamoyo is also so beautiful and being on the beach looking across the Indian Ocean thinking about the slaves being shipped across from that very beach was as if i had deja-vu. History passed by me. Maybe my ancestors were talking to me. Very interesting experience indeed.

SNA: What’s next for you and the band when you get back to Australia? Any news to share yet on your latest album?

GB: Back in Australia, we have a line up of shows coming up. We plan to get back in the studio to finish the next album which we hope to release towards the end of the year. Right now, we are still buzzing from the East Africa tour and the release of Afro-Sega (the Tony Allen Remix) and the animated video clip to go with it. Myself and Jamie are also working on a reggae project and band called Crucial Rockers from which we are hoping to have a release, whether it's a single or an album at some point this year or early next year. This should keep us busy.

The Interview » Be a reporter: Write and send your article » Subscribe for news alert
Tags: Afro-Kreol, Afro-Sega, Kreol Daughter