UN likely to vote next week on Syria sanctions 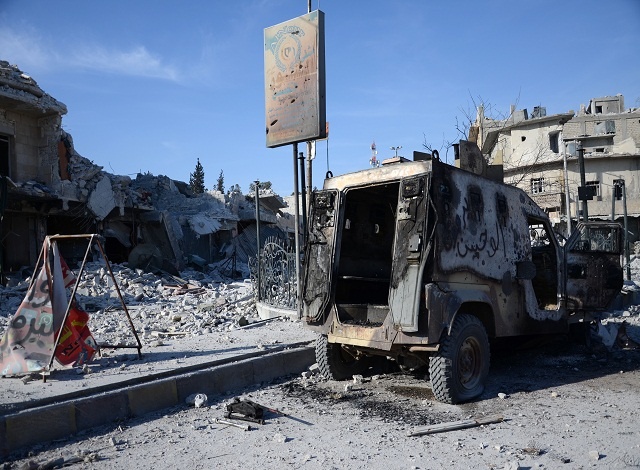 A general view shows a burnt out vehicle on a destroyed street in the northwestern border town of al-Bab on February 23, 2017 after Turkish-backed Syrian rebels fully captured the town from the Islamic State (IS) group. Al-Bab, just 25 kilometres (15 miles) south of the Turkish border, was the last IS stronghold in the northern Syrian province of Aleppo. (Nazeer al-Khatib / AFP)

(AFP) - The UN Security Council is likely to vote next week on a draft resolution that would slap sanctions on Syria over the use of chemical weapons, but Russia is almost certain to veto the measure, diplomats said Thursday.

Britain, France and the United States are pushing for a ban on the sale of helicopters to Syria and sanctions on 11 Syrians and 10 entities linked to chemical attacks in the nearly six-year war.

The measure follows a joint investigation by the United Nations and the Organization for the Prohibition of Chemical Weapons (OPCW) which concluded in October that the Syrian military had carried out at least three chemical attacks in 2014 and 2015.

"This is the significant response that the Security Council committed to do in the event of proven use of CW in Syria," said the diplomat, who spoke on condition of anonymity.

"The US, UK and France are very clear that this is an issue of principle," he said. Russia's ambassador said at a meeting last week that Moscow would block the measure, said the diplomat.

Russia has used its veto six times to shield its Damascus ally from any punitive action.

China, another veto-wielding Security Council member, is expected to abstain in the vote.

France and Britain presented a first draft on imposing sanctions on Syria in December, but held off on action to give the new US administration time to study it.

Another Security Council diplomat said the trio was moving ahead now that US President Donald Trump's administration was fully onboard with the push for sanctions against Syria.

The vote could take place as early as Monday or Tuesday.

"We hope it will come to a vote as quickly as possible," a US official told AFP.

The draft resolution, seen by AFP, would impose a global travel ban and assets freeze on 11 Syrians, mostly military officials including the head of Syrian air force intelligence and the commander of air operations in areas where attacks occurred.

These commanders are said to have been involved in an assault by helicopters that dropped chlorine barrel-bombs on the villages of Qmenas, Talmenes and Sarmin.

Among the entities that would be blacklisted is the CERS research center in Damascus, described as responsible for developing and producing chemical weapons, and five firms said to be front companies for CERS.

The draft resolution would also ban the sale, supply or transfer to the Syrian armed forces or to the government of helicopters or related materiel including spare parts.

The proposed measure would set up a sanctions committee that would report to the Security Council on designating individuals and entities to a new blacklist.

Syria has denied using chemical weapons while Russia has dismissed the investigative panel's findings as "inconclusive." The panel also found that the Islamic State group had used mustard gas in an attack in 2015.

The Security Council is due to discuss chemical weapons use in Syria during a meeting on Friday.

The United States last month blacklisted 18 senior Syrian military officers and officials over the use of chemical weapons, but there have been no UN sanctions imposed on Syria due to Russia's opposition.