Another double-hearted coconut tree in Seychelles 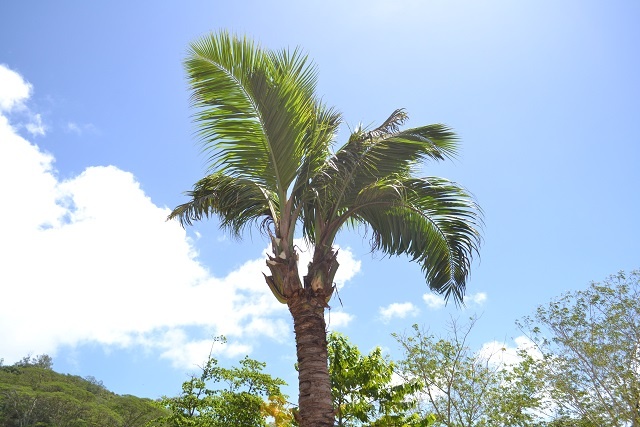 (Seychelles News Agency) - The Constance Ephilia resort in Seychelles has a double-hearted coconut tree growing on their premises, the second discovered in the country.

The landscape manager, Cedrick Thomas, told SNA that as far as he knows, “the tree is the only one found on Mahe, the main island of Seychelles’ archipelago in the western Indian Ocean.

As a keen observer, Thomas said that the tree appeared normal until infested by bugs.

“It was attacked by a beetle known as (makabe) which started eating its middle part. I treated it with chemicals which killed the beetle,” Thomas told SNA.

He added that a few weeks later, an odd offshoot that looks similar to the tree had started to grow nearby the existing one.

The coconut tree is traditionally considered as the ‘tree of life’ for its number of uses, which ranges from medicine, clothing, shelter, charcoal, and water. The tree is found all over the island nation and is usually spread along the coast of most beaches.

Thomas said the tree is being protected and used as an attraction for visitors at the hotel.

Monette Nourice, who specializes in the study of plant, said the extra shoot has grown not because this is where it wanted to germinate, but because of a genetic change and this occurs rarely.

“In this case, the tree experienced some form of shock either from the chemical used for the beetle or from physical damage. From that the old heart withered and probably took a long time to regenerate,“ said Nourrice.

Nourrice said that the plant had a natural response to develop a new heart as the old one was very weak and they are now both developing adjacent each other.

“Although they share minerals and water, the extra shoots are not harmful to the tree that will develop a larger root mass as an adaptation to its condition, and which tends to make it stronger than the rest of the coconut palms. In fact, such plant reproduces more nuts as opposed to the regular tree,” added Nourrice.

General » Be a reporter: Write and send your article » Subscribe for news alert
Tags: Constance Ephelia Resort, ‘tree of life’