US promises no mass deportations in bid to calm Mexico 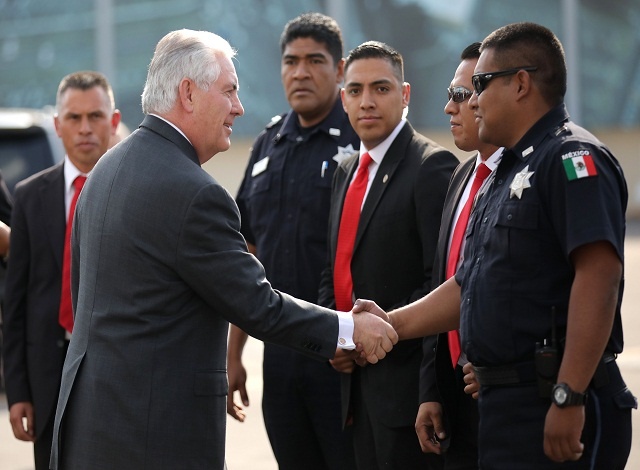 U.S. Secretary of State Rex Tillerson (L) shakes hands with police officers and security personnel as he gets ready to depart from the Benito Juarez international Airport in Mexico City on February 23, 2017. Tillerson and U.S. Secretary of Homeland Security John Kelly met in Mexico City Thursday with Mexican ministers who expressed "concern and irritation" over Trump's combative stance on trade and migration ties with Mexico. (CARLOS BARRIA / POOL / AFP)

(AFP) - US officials promised Mexico no "mass deportations" or use of military force to expel immigrants, moving to calm tensions over President Donald Trump's vow to crack down on "bad dudes" illegally residing in his country.

US Homeland Security Secretary John Kelly and Secretary of State Rex Tillerson met with Mexican ministers who expressed "concern and irritation" over Trump's combative stance on trade and migration ties with Mexico.

Trump has outraged the United States' southern neighbor by vowing to build a wall along the border to keep out immigrants, and branding those from Mexico as rapists and criminals during his presidential campaign.

The Department of Homeland Security (DHS) on Tuesday issued new orders to step up the arrest and deportation of illegal immigrants, many of them Mexicans.

But Kelly promised at a news conference in Mexico City on Thursday that "there will be no, repeat, no mass deportations. Everything we do in the DHS will be done legally."

"There will be no use of military force for immigration operations," he added.

Earlier at the White House, Trump had described the stepped-up deportation drive as "a military operation."

But his spokesman Sean Spicer later told a news conference that Trump was using the term "military" simply "as an adjective" to mean "efficient."

Or as Trump himself put it: "We're getting really bad dudes out of this country, and at a rate that nobody's ever seen before."

Mexican Foreign Minister Luis Videgaray, who met with Tillerson, repeated his vow not to let the United States impose migration reforms on it "unilaterally."

"There is concern and irritation among Mexicans about what are seen as policies that could be detrimental for Mexicans in Mexico and abroad," he said.

"There are well-known differences and the best way to resolve them is through frank, clear dialogue."

Tillerson said the two sides "reiterated our joint commitment to maintaining law and order along our shared border by stopping potential terrorists and dismantling the transnational criminal networks moving drugs and people into the United States."

But he agreed that cooperation on border security had to work both ways.

"We underscored the importance of stopping the illegal firearms and bulk cash that is originating in the United States and flowing into Mexico," he said.

"There's no mistaking that the rule of law matters along both sides of the border."

Kelly said the two countries were also cooperating on ways to stop US-bound migrants traveling up through Mexico from the impoverished and violent nations of Central America.

The US officials met later with Mexican President Enrique Pena Nieto, who had canceled a planned meeting with Trump in Washington last month over the US leader's vow to make Mexico pay for the border wall.

Meanwhile, a few dozen mostly American protesters gathered in front of the US embassy to demand a halt to Trump's rhetoric against Mexico.

In a move that may be aimed at pressuring Mexico, Trump has ordered US government agencies to count how much aid they are giving to that country.

Mexico sends 80 percent of its exports to the United States.

Trump has vowed to crack down on US companies producing in Mexico, hoping to see jobs shifted back to the United States.

He has also threatened to block remittances sent to Mexico by Mexican workers in the United States and called for a renegotiation of the North American Free Trade Agreement with Mexico and Canada.

Mexico's Economy Minister Ildefonso Guajardo told the Televisa network Thursday that his country would place retaliatory tariffs on US goods as a "plan B" if a renegotiated agreement left Mexico in the lurch.

Trump has said he is determined to reduce the $70 billion US trade deficit with Mexico even at the risk of harming ties.

"We're going to have a good relationship with Mexico, I hope," he said Thursday. "And if we don't, we don't."

General » Be a reporter: Write and send your article » Subscribe for news alert
Tags: Mexico, US, diplomacy, migration, trade