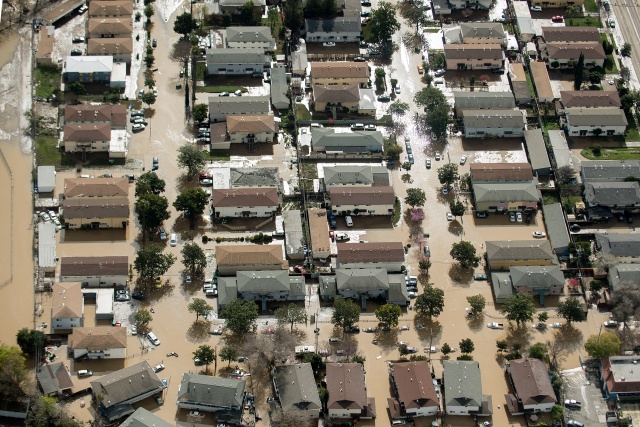 Floodwaters surround homes and cars on February 22, 2017, in San Jose, California. Thousands of people were ordered to evacuate their homes early Wednesday in the northern California city of San Jose as floodwaters inundated neighborhoods and forced the shutdown of a major highway. (NOAH BERGER / AFP)

Almost 200,000 people fled their homes more than a week ago after flooding and increased water levels at the Oroville Dam in northern California prompted authorities to channel excess water down an emergency spillway, which quickly began eroding and created a potentially catastrophic situation for residents below.

He asked the state legislature to approve $387 million for use from a water infrastructure fund in addition to $50 million from a state general fund.

"Our aging infrastructure is maxed out. We can take some immediate actions -- and we will -- but going forward we'll need billions more in investment," Brown said.

The governor already secured federal resources to repair the dam, which was built in 1968 and is the tallest in the United States at 770 feet (235 meters).

Although evacuation orders were lifted after two days, authorities have put area residents on warning that they may need to leave the area again, as heavy rains lash the region after years of drought.

President Donald Trump cleared the path to release federal aid for the dam after a request from Brown, who had already declared a state of emergency to mobilize local resources.

Calling the situation a "textbook example of why we need to pursue a major infrastructure package in Congress," White House spokesman Sean Spicer stressed that the nation's dams, bridges, roads and ports have "fallen into disrepair."

General » Be a reporter: Write and send your article » Subscribe for news alert
Tags: US, weather, california, floods, funding