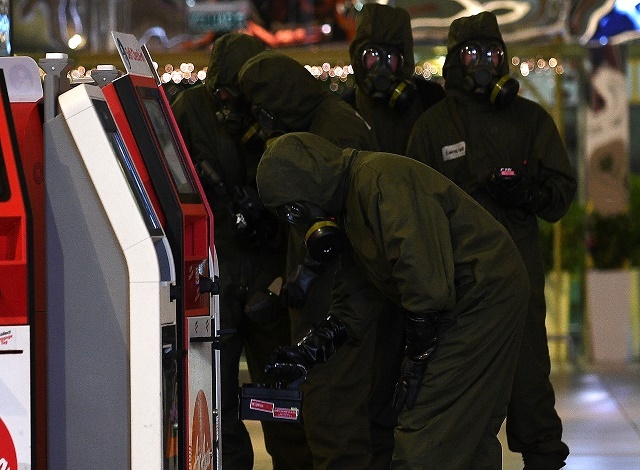 Members of Malaysia's Hazmat team conduct a decontamination operation at the departures terminal of the Kuala Lumpur International Airport 2 (KLIA 2) in Sepang on February 25, 2017. Kim Jong-Nam, the half-brother of North Korean leader Kim Jong-Un, was killed at the airport on February 13. Malaysian police told the public they would do everything possible to ensure there was no risk from the lethal VX nerve agent used to assassinate Kim Jong-Nam. (MANAN VATSYAYANA / AFP)

(AFP) - Malaysian police Saturday told the public they would do everything possible to ensure there was no risk from the lethal VX nerve agent used to assassinate Kim Jong-Nam.

People were worried about the use of the highly toxic agent developed for chemical warfare, state police chief Abdul Samah Mat said, after the audacious February 13 attack by two assassins at Kuala Lumpur airport.

Authorities revealed Friday the half-brother of North Korean leader Kim Jong-Un was killed by the odourless, tasteless and highly toxic VX, listed by the UN as a weapon of mass destruction.

"We are taking action on this to be really sure," Abdul Samah said.

"We are working closely with our counterparts from our chemistry department, forensics and the team from the nuclear atomic agency in Malaysia."

He added: "We want to make it clear to the public if there is any effects ... which could affect the health of the people."

National police chief Khalid Abu Bakar said Friday experts would sweep the airport terminal where the attack took place for traces of the toxin as well as other locations the two female suspects now in custody had visited.

Detectives are also holding a North Korean man but want to speak to seven other North Koreans, four of whom are thought to have fled to Pyongyang.

One man wanted for questioning, who is believed to still be in Malaysia, is senior North Korean embassy official Hyon Kwang Song, who enjoys diplomatic immunity.

However, Abdul Samah insisted under Malaysian law "we have the right to call anybody for statements for our investigations".

He added if wanted people do not co-operate, police would issue a notice "compelling" them to come forward.

The next step would be to obtain an arrest warrant, Abdul Samah said.

He also told reporters an investigation in connection to the murder was ongoing at an apartment complex in Kuala Lumpur but declined to comment on local media reports chemicals has been seized from the address.

No next-of-kin have yet come forward to formally identify the body of the 45-year-old victim or provide a DNA sample, but Abdul Samah said authorities would give relatives a "reasonable" amount of time to do so.

Jakarta was given consular access Saturday to Siti Aisyah, the Indonesian woman suspect.