Dumbphones survive rise of the smartphone 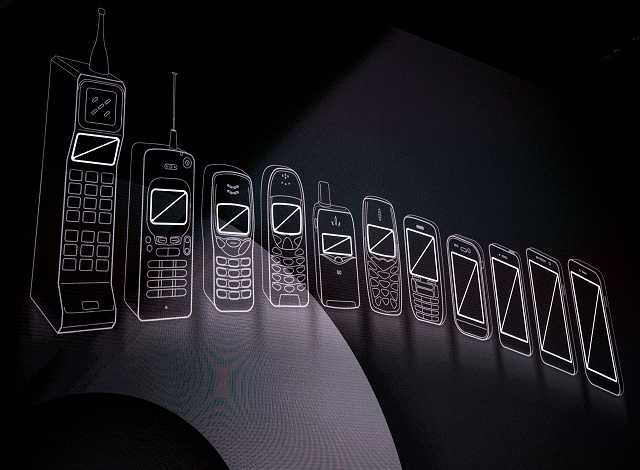 Mobile phones evolution is displayed on a screen during the presentation of the new model LG G6 by South Korean multinational conglomerate corporation LG's on the eve of the official start of the Mobile World Congress in Barcelona on February 26, 2017. Phone makers will seek to seduce new buyers with even smarter Internet-connected watches and other wireless gadgets as they wrestle for dominance at the world's biggest mobile fair starting tomorrow. (Josep Lago / AFP)

(AFP) - Dumbphones -- handsets that just make calls and send texts -- were set to disappear as technology moved on, but they have survived in emerging markets and among nostalgics of simpler devices in the West.

Their continued appeal was underscored on Sunday in Barcelona on the sidelines of the Mobile World Congress, the world's biggest mobile expo, as Nokia unveiled a revamped version of its iconic 3310 model, more than a decade after it was phased out.

Dumbphones remain useful to telecoms operators to "relaunch or accelerate" mobile phone use as they are relatively inexpensive, said Julien Miniconi, a telecoms expert at consulting firm Wavestone.

"It makes sense especially in countries where the network is not great," he added.

Last year 1.5 billion smartphones were sold around the world, according to research firm Gartner.

But the dumbphone market is still significant, with nearly 400 million sold in 2016.

In certain emerging markets such as India, their sales still outstrip smartphones.

Basic phones accounted for over 55 percent of all mobiles sold the third quarter of 2016 in the world's second most populous country, according to the International Data Corporation, a market research firm.

And dumbphone sales are continuing to rise in this major market by about four percent per year.

Even in developed nations where the telecoms market is mature, the phones continue to sell.

"Today they are niche markets, either for those looking for vintage or for those who are anti mobile internet or old people," said Thomas Husson, a mobile analyst at Forrester, a research group.

Young kids also use them as a first phone. Some people use them as secondary phone to lend to visiting friends and family from another country and avoid roaming charges.

British actor Eddie Redmayne, who won an Oscar in 2015 for his role as scientist Stephen Hawking in "The Theory of Everything", made headlines as he became the latest in a growing band of smartphone refuseniks.

"It was a reaction against being glued permanently to my iPhone during waking hours. The deluge of emails was constant and I found myself trying to keep up in real time, at the expense of living in the moment," the 35-year-old said of his decision to go back to a less sophisticated phone.

Within any age group, it's not hard to find people who refuse to join the smartphone revolution.

"I have no interest in a smartphone -- it's expensive, fragile and I don't see the use for it," said Sandrine, 39, a Paris-based illustrator.

"There is also the whole commercial aspect as well, with the need to update phones all the time, without mentioning the opacity of work conditions in China" where many smartphones are made, she added.

Germany's Deutsche Telekom includes several basic phones in its catalogue to meet the needs of clients "who just want to be reachable", said a spokeswoman for the operator.

Nokia's original 3310 sold nearly 120 million units worldwide, making it one of the world's best-selling mobiles, but it is unlikely the revamped version unveiled Sunday, which includes internet access, will post similar sales.

HMD Global, the Finnish start-up which bought the rights to the Nokia brand last year and is making the phones, is seeking publicity for the three other smartphones which it unveiled alongside the new 3310, said Forrester analyst Thomas Husson.

"It is a way to create a halo effect around the other models by reviving talk about the Nokia brand," he said.

Ian Fogg, head of mobile at research firm IHS, said that HMD, as a start-up, "needs to leverage the warm memories (of the 3310) and show that they are innovating too. They don't want to be seen as a heritage brand."