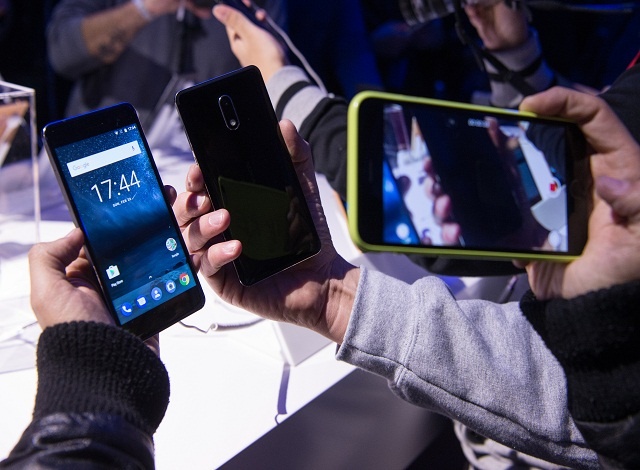 Journalists take pictures of Nokia's new phone "Nokia 6" after its presentatioin on February 26, 2017 in Barcelona on the eve of the start of the Mobile World Congress. Phone makers will seek to seduce new buyers with even smarter Internet-connected watches and other wireless gadgets as they wrestle for dominance at the world's biggest mobile fair starting tomorrow.
Josep Lago / AFP

(AFP) - The number of mobile phone users globally will surpass five billion by the middle of this year, according to a study released Monday by GSMA, the association of mobile operators.

With populations in Asia, and notably India, on the rise, the number, which stood at 4.8 billion a year ago, should mushroom to 5.7 billion, or three quarters of the world's population, by 2020.

Asia will account for around half total growth, according to GSMA’s 'Mobile Economy' report with India alone adding some 310 million new subscribers in the coming three years.

The study also showed a trend towards towards mobile broadband networks and smartphones, said the study, which highlighted the mobile industry’s growing contribution to economic activity and social development.

"Our latest Mobile Economy report reveals how the near ubiquity of smartphones and high-speed connectivity is enabling innovation in areas such as artificial intelligence and driving the digital transformation," added Granryd, citing trillion-dollar investment in global networks since 2010.

That investment had seen the telecoms sector account for a 4.4 percent share of world GDP worth $3.3 trillion dollars last year, rising to a 4.9 percent share by 2020, for economic value equivalent to $4.2 trillion.

The report said the mobile ecosystem last year employed 28.5 million people directly or indirectly, a figure it said would rise to 30.9 million by 2020.

It added the sector would contribute $500 billion in tax receipts by 2020, up from $450 billion last year, not including revenue from spectrum auctions, worth almost $19 billion in 2016.

Operators are forecast to invest a further $700 billion by 2020 when 5G connectivity is set to bring ever faster data connection.

Ahead of 5G -- forecast to enable subscribers to download a full HD film in less than one second -- 4G has been steadily becoming the norm, rising from current market penetration of 21 percent to 41 percent by 2020.

The organisation added 55 percent of overall connections were now running on mobile broadband (3G/4G) networks, which are forecast to account for almost three-quarters of connections by 2020.

In India, a new banking system to reach the masses