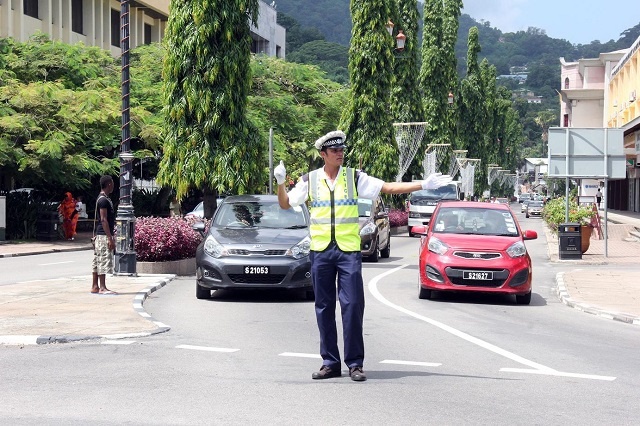 All projects aimed at tackling the traffic problems will be reviewed as they are implemented in phases and depending on evaluations to be made, various amendments can be made. (Patrick Joubert, Seychelles News Agency)

(Seychelles News Agency) - Could there be a solution in sight to Seychelles' most frustrating traffic?

In an effort to combat the increasing traffic jams seen on the Seychelles' main island especially around the capital of Victoria, the Ministry of Habitat, Infrastructure and Land has revealed solutions for tackling the traffic problems.

Minister Charles Bastienne told reporters last week that the first phase of the biggest ongoing project, which is the North to South bypass, is almost complete.

This phase, which will be opened to the public in mid April, will connect Anse Etoile in the north east of Mahe to Latanier Road in Victoria via Ile Aurore and Perseverance, two reclaimed areas.

Minister Bastienne said the bypass will ease traffic considerably as it will permit traffic travelling from east to part of the north of Mahe to avoid two main roundabouts -- 5th June and Le Chantier.

The second phase, from the amusement centre to Latanier Road, has already started.

Bastienne spoke on another ongoing project in the centre of the capital -- the enlarging and upgrading of the St. Joseph Street in front of La Rosiere school and Hangard Street.

Other significant projects planned for the future include the construction of a roundabout on Bois De Rose Avenue near the Seychelles Trading Company’s Hypermarket connecting road to Mont Fleuri road. It will also involve a footbridge from Bois De Rose Avenue to International School.

There will be four lanes starting from the Animal Feed Factory at Bois de Rose going up to the International Conference Centre of Seychelles (ICCS).

Roundabouts will be established to facilitate traffic circulation on the eastern side of Mahe -- one at Plaisance and another at Pointe Larue next to the airport. A third lane will be added from the airport up to the Seychelles Police Academy.

Another bypass will link St. Louis to Bel Air through Stevenson Delhomme Road.

All the projects are part of the Victoria Traffic Management Master Plan of Seychelles, an archipelago in the western Indian Ocean.

The chief executive of the Seychelles Land Transport Agency (SLTA), Parinda Herath, told SNA, “These projects will be reviewed along the way as we implement them in phases and depending on evaluations to be made, various amendments can be made to these individual plans and the master plan as a whole.”

Herath added that in addition to the projects, drivers themselves play a great role in contributing to how the traffic flows. This could be done by improving the way they drive and by abiding to the traffic rules and guidelines.

“Under the Victoria Traffic Management master plan there are many projects that we are implementing in phases according to the resources available to us,” said Herath.

The SLTA’s chief executive said the plan was a dynamic one, which continuously adapts to changes in the traffic flows that occur due to new developments and others that take place such as demographic changes and availability of resources.

“With increased importation of vehicles it is difficult to keep up mainly because of the lack of space to construct new roads," said Herath.

He added that: “However, it is part of our job, jointly with the Department of Land Transport to come up with new, innovative projects that we can implement to keep the traffic flowing at a reasonable rate.”

Seychelles’ Carnival to be incorporated into the Creole Festival