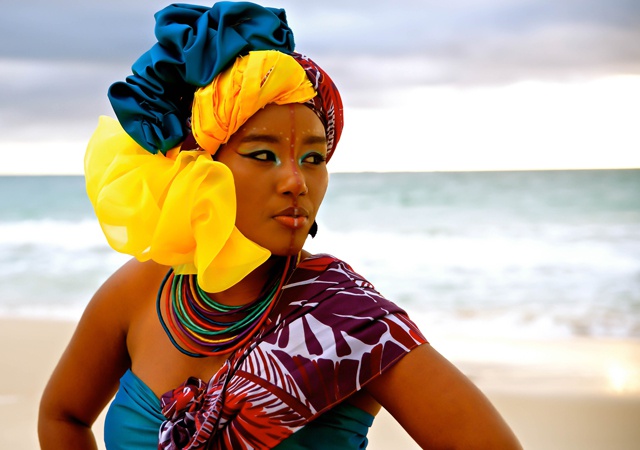 (Seychelles News Agency) - She stands in front of a dozen or so nervous people. Usually the roles are reversed, she thinks, as the band strikes up a rhythm. Her hips sway with the music, almost automatically, and the familiar sounds of a home far away wash over her as the sega music begins. The assembled crowd is hesitant at first, as she coaxes them to move with the music, teaching them how to move their feet.

Her vibrant presence compels the audience to get up and dance.

“Don’t be afraid to shake your coconuts!” she says encouragingly, laughing good-naturedly at their stiff arms and nervous movements. The atmosphere sinks in and they loosen up, getting braver with each drum beat until it becomes a reality that a group of Australians are performing an island dance born off the coast of Africa.

This is a dance workshop at the Denmark Festival of Voice in Western Australia, a small-scale, intimate festival held every year in the beautiful Australian coastal town. The festival celebrates the human voice and each year brings together an inspiring lineup of local, national and international artists to share their talents with visitors.

This particular workshop is being taught by Grace Barbé, a Seychellois artist living in Australia.

For Grace, her song and dance workshops are an ideal way to teach visitors more about Seychelles culture and music. She demonstrates the tsingé, moutya and sega dances and teaches the audience to sing along to the song.

“I speak about our history, our ancestors, the slave trade, the European colonial rule, and the melting pot and diversity of what makes the Creole culture and its people,” she says. “The Creole music and dance have their roots in African, Malagasy and European cultures,” she told SNA in an e-mail interview.

“The songs I chose were ‘Masezarin’, originally from La Digue by the Masezarin group, an original Moutya of mine called ‘Lesklav’, a song about a runaway slave from Seychelles and ‘Mous Pran Fler’, a traditional Seychelles folk song I think most Seychellois know.”

Grace adds that she asked for and received permission from the Seychelles Ministry of Culture to record the ‘Mous Pran Fler’ folk song for her latest album, ‘Welele!’

The response from these workshops, she said, was “fantastic, fun and hilarious”.

“I have been doing this for a while now and each time, the audience is always fascinated because the majority of people in Australia have never heard of the Seychelles or know very little about the culture and the music,” she explains.

“Everyone really got involved in the workshop. I’m always referencing the use of the word ‘coconuts’, telling them not to afraid to shake their beautiful ‘coconuts’ (their buttocks!),” she laughs. “People can be stiff sometimes, especially when they’re not used to dancing to our rhythms.”

Grace does concede that the audience at the festival has a genuine appreciation for music.

“They want to learn and they take the workshops and concerts very seriously. So to see Australians and people from all walks of life sing these Creole songs and dance the sega is very amusing but humbling.”

This year was the second time Grace had been to the Denmark Festival of Voice as an artist.

“The first time I was invited to be an ‘Artist in Residence’ to facilitate singing workshops with the local choirs and to mentor some upcoming young musicians from the town,” she explains. “With this program, I also spent some time with a local and respected Aboriginal artist, learning about the land or ‘place’ of his ancestors. The Aboriginal cultural history and dreamtime stories are very rich.”

As for Grace, her story began on Mahé the main island of the Seychelles, where she was born, although her mother’s side of the family are from Praslin the second most populated island and her father’s family are from La Digue which is the third most populated island. Her first experience of Australia came at the age of six, when her mother received a scholarship to study at the University of Perth.

The family returned home at the end of her mother’s studies, when Grace was 12. However, it was not long afterwards that a 16-year-old Grace returned to Australia with her mother, sister and twin brothers, and this time, the move was permanent.

It was her mother’s love of Seychellois culture and the arts that encouraged Grace to start performing, first for the Seychellois community living in Perth, then seeking a wider audience. Her deep desire to hold on to her Seychellois roots turned into a deep-seated passion to use her musical platform as a means to tell the story of her origins and her homeland.

“I perform to thousands of people here. I have my Seychelles flag on my microphone stand on stage for all to see. I’m proud,” she says earnestly.

Initially, Grace performed reggae with a smattering of other styles, but over the years she began to feel something she described as a void developing within her. She needed to find her true essence and identity as an artist, and thus began to develop her own unique sound – ‘Afro-Kreol’.

Instead of being one of many performing the mainstream styles of reggae, rhythm and blues or pop, Grace now dances to the beat of her own drum, performing tsingé, moutya, sega and even a local reggae hybrid known as ‘seggae’ to pay homage to her favourite Seychellois musical icons such as Ton Pa, Raymond Lebon, Le Boys and David Philoé.

Following the release of her debut album "Kreol Daughter" in 2008, Grace has performed at major festivals all over the Indian Ocean (Mauritius, La Reunion and Seychelles), as well as at many of Australia's leading music festivals, including WOMADelaide, WOMAD New Zealand, Byron Bay Bluesfest and Woodford Folk Festival.

Among her many performing credits, Grace has been invited twice to perform the South African National Anthem ‘Nkosi Sikelel ‘iAfrika’ for the Australia vs South Africa cricket and rugby finals, in front of thousands of spectators, broadcasted to a worldwide audience.

But to Grace, staying connected to her Creole heritage is always the most important aspect of her work.

“Your roots are important; that’s your identity, no matter where you are,” she says with a touch of nostalgia. “I am based in Australia but my roots are in Seychelles and I really love my culture and my people. I’m crazy about our rhythms and our food!”

“We are such a tiny nation but that very tiny nation tucked away in the middle of the Indian Ocean is bursting with rich colours, culture, music, arts, food, stories, history, marine life, and the beauty, cheekiness, joy, humour, the everyday struggles, hard work and challenges of the Creole people.”

Grace was recently appointed a Tourism Ambassador for the Seychelles by the Ministry of Tourism and Culture in recognition of the work she does to promote Seychellois arts and culture to the people she reaches with her music. Grace also came to Seychelles for the first Carnaval International de Victoria in 2011 where she performed to a home audience for the first time, and says she would love to return again soon with her band.

Apart from being a performing and recording artist, Grace is also a vocal coach and a music facilitator and mentor, teaching vocals at a music Academy and at a private school in Australia. She is also a keen crochet enthusiast.