In India, a new banking system to reach the masses 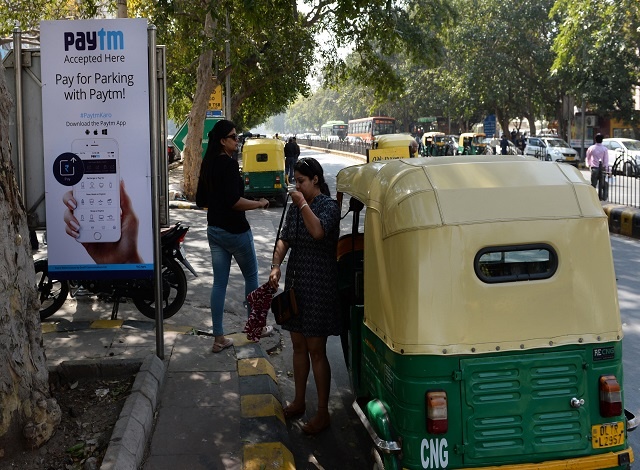 In this photograph taken on February 27, 2017, Indian pedestrians walk past a sign advertising Indian electronic and cellphone-based payment system Paytm outside a parking area in New Delhi. At a furniture store outside India's capital, a salesman scans the manager's ID and takes her fingerprint on a biometric device attached to his cellphone. Within minutes, Meenakshi Sharma becomes eligible for an account with Paytm, joining the hundreds of thousands who have signed up to a payments banking system that is revolutionising India's retail sector.(Sajjad HUSSAIN / AFP)

(AFP) - At a furniture store outside India's capital, a salesman scans the manager's ID and takes her fingerprint on a biometric device attached to his cellphone.

Within minutes, Meenakshi Sharma becomes eligible for an account with Paytm, joining the hundreds of thousands who have signed up to a payments banking system that is revolutionising India's retail sector.

Before the government's shock decision in November to withdraw high-value bank notes from circulation, around 90 percent of everyday transactions in India were in cash.

So in 2015, India's banking regulator offered licences for what are known as payments banks to stop people putting their money under a mattress.

This new model can accept deposits -- currently limited to 100,000 rupees (around $1,500) per account -- but unlike traditional banks are prohibited from offering loans and issuing credit cards.

Another problem was not just that people did not have bank accounts, but that those who did were not using them.

According to a recent report by the McKinsey Global Institute, Indians lose more than $2 billion a year in income simply because of the time it takes travelling to and from a bank.

"It is no wonder that because of the time and cost required to interact with a bank, many poor and rural individuals opt instead to use cash for transactions," the report said.

Those most impacted by the cash ban were the same group of people that the payments banks are supposed to reach -- the poor and those in rural areas.

To fill that gap, regulators have offered licences to firms that already had large distribution networks in place, like telecom and e-commerce companies.

It has enrolled two million people so far through the mom and pop stores in its network where customers top up their phones.

At these outlets customers can make deposits for free and withdraw cash for a nominal amount. Other services like transfers can be conducted on cell phones.

"The affluent, high net-worth person is overbanked and always has access to a credit card or an ATM... but the situation at the bottom of the pyramid is diametrically opposite," Shashi Arora, chief of Airtel Payments Bank, told AFP.

"This is digital and paperless and at a bare minimum cost to that part of society that needs it the most."

Paytm is working on joining Airtel and looking at a summer rollout of its payments bank.

It has the largest mobile wallet in the country and its 200 million active users are potential customers for its new bank.

In the days after the cash ban, it saw a 700 percent increase in overall traffic, a 1,000 percent growth in the amount of money added to its system and a doubling of daily transactions on its app to five million.

Having built a massive customer base, Paytm is now signing up merchants in small towns and rural India.

It has thousands of employees walking the streets signing them up -- 3.7 million merchants across 1,000 cities and small towns so far -- and small entrepreneurs like tea and vegetable vendors to accept payments through the Paytm wallet.

"We want to bring half-a-billion people into the formal economy by 2020," Deepak Abbot, a senior vice president at Paytm, told AFP.

"The move to digitisation means transactions are now formally recorded instead of being done in cash like in the past and that means the revenue collection will absolutely go up," said Mumbai-based tax consultant Uday Ved.

But there are challenges.

The main one is that many potential customers are not tech savvy and need hand-holding as was evident when the Paytm employee was signing up Sharma at her store in Noida, a satellite city of Delhi.

She did not have the Paytm app and he had to first delete stuff to create enough space to download it on her phone.

Once that was installed, she had to send a text message to start her account but found her phone was out of money. Then came the next hiccup -- there was no network signal until she ducked out of the store.