Plastic ban in Seychelles requires new creativity in the home 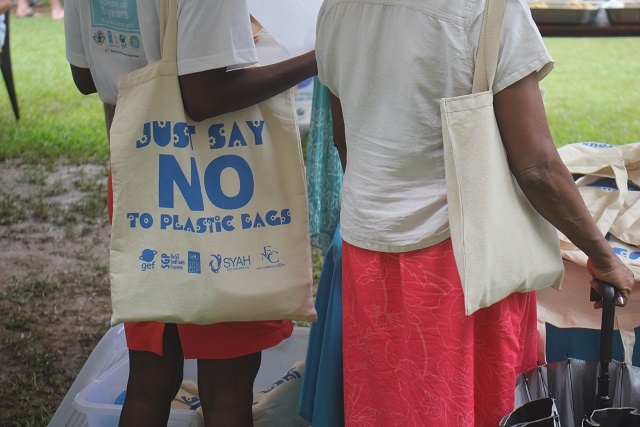 Most of the people SNA spoke to thought the plastic ban is a good initiative. (Salifa Magnan, Seychelles News Agency)

The island nation this year joined Rwanda, Bangladesh and Madagascar, among a growing list of countries and cities, in banning the use and importation of such items as plastic bags and plastic forks and spoons.

SNA spoke to residents to learn their feelings on the ban and the alternative approaches they are using to compensate for the vacuum that might have been created.

Most of the people SNA spoke to thought the plastic ban is a good initiative.

“Plastics take years to decompose in the environment and I think that the ban is a good thing,” said Shadia Alfaraj.

The Seychelles Trading Company (STC), one of the country’s largest trading companies, also welcomed the initiate brought about by the Ministry of Environment, Energy and Climate Change.

How to replace plastic bags that were so handy at home?

Single-use plastic bags, mostly obtained from running errands, were being reused in multiple ways at home – to store fish and meat, separate items or to dispose of rubbish among others. Most interviewees that SNA spoke to said they will find alternative ways to get things done.

“Not having the plastic bag to use in our bins is not a worry for me as I use carton boxes to dispose of my rubbishes,” said Alfaraj.

Mirenda Leon said that “the lack of plastic bags won't affect me much - I will either use the bin liners or use my trashcan as is and wash it afterwards.”

Bin liners are one of the plastic items that have been exempted from the ban enforced in the 115-island archipelago in western Indian Ocean. They can be purchased in most shops in the island nation.

Packaging used for local snacks and products such as bread and banana chips, and plastics designed for agricultural purposes have also been exempted.

Importers and retailers have been given a grace period -- until June -- to exhaust their stocks of plastics. During this time, some shop owners are outsourcing alternatives to plastics.

“When people buy fabric, they need large plastic bags to transport their purchases in, so I have to find an alternative that can cater for the same amount. I have already gathered information that in India the [eco-friendly] bags are available,” said Carmel Faure, the owner of Juliette's Fabrics in OJ Mall, Victoria.

Felix said that STC is “sourcing for the right carrier bags/products that will be available at the best price for the company so that it can be passed on to customers.”

The trading company is already selling reusable shopping bags to customers at its outlets as options to carry their goods.

“STC is also sourcing for biodegradable bin liners and will also make available on the local market biodegradable cutleries such as spoons, forks, knives and biodegradable plates and trays made of corn. Paper bags and boxes are also being considered for use,” said Felix.

Other companies and shops are also selling reusable bags. 'Sak Vakwa' [in the native creole language], a type of eco-bag that was more popular many years ago, is still on sale in some souvenir kiosk but with less popularity.

The owner of Roline Trading located in Trinity House, Victoria, Roland Payet told SNA that they would like to venture into the use of paper bags, but importing their own bags is expensive.

“If we were to buy [paper bags] in large quantities, they would last use for a longer period but at the moment, we are not ready to invest such an amount of money into this,” said Payet.

Payet added that it “would be great if we could obtain them [the paper bags] locally, meaning that we wouldn’t have to invest a lot of money to have our own stock.”

A businessperson that SNA spoke to said the ban has created potential for new business ventures. After doing some research, Diane Cedras set up Ced Eco Access, where she imports biodegradable take away boxes, cutleries, cake boxes and paper bags.

“At the moment the biodegradable products are more expensive than the plastic ones. I am sourcing products from Indiaas they are cheaper there,” said Cedras.

Talking about additional costs, some retailers express that they will have to sell the bags separately whereas others will add the cost directly to the product they are selling.

“Our bags sell at 5 rupees ($0.3) per piece and we advise our clients, once they have purchased the bag, to keep it at hand so that they can use it another time,” said Maria Baptiste, a saleswoman of Pretty Fit in Unity House, Victoria.

In effort to phase out plastic from Seychelles, government steps up enforcement