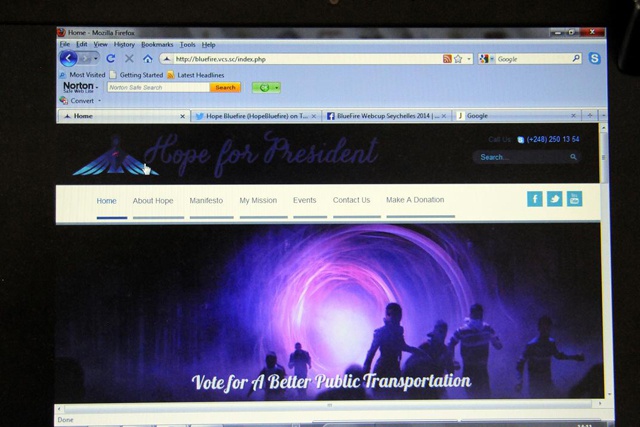 Emerging with 16 votes, the four managed to impress the Judges enough to be declared the team that had designed the best 'political campaign portal for the United Webcup Confederation to elect its president'.

The Seychelles Webcup which started at noon yesterday came to an end at noon this Sunday exactly 24 hours after it had started.

In an interview wih SNA after the competition ended, Chang Yunn, Monnaie, Lebon and Mangroo admitted that they were looking forward to getting some sleep.

“No one slept…… it was hard especially in the break of dawn, but we persevered,” said Rondy.

“It has been a very long and exhausting working day and night. It wasn’t easy at all, we’ve been up for more than 24hours. There was great team work amongst us and we are happy to have won. This means a lot to us.”

Blue Fire’s only opponent in the competition was the SRV team comprising only of Jean-Francois Rose.

Rose had to work on his project solo, after his two team mates failed to turn up but he managed to put up a good fight emerging with 14 votes only 2 less than the winning team.

“The night was extremely though…. It was one challenge after another, had to do everything on my own, against a team of four. I also faced internet and server issues in the early morning…. But I’m generally satisfied with my results,” Rose told SNA.

He nevertheless expressed disappointment that his team mates failed to turn up for the competition.

“Since it’s the first ever competition of its kind in Seychelles, I did not expect them to back out. I see this competition as a rare opportunity for professionals in our field to be recognised and expected more support from them,” said Rose.

“I could not fully accomplish what I intended to do. My website was incomplete, especially when it came to content. But my past experience working as a webmaster at Cable and wireless Seychelles has enabled me to go through the whole process of website making on my own, and with originality. I’ve spent so much time in the designing of the web…. The judges have acknowledged my effort and that’s why I’ve won 14 votes against the Blue Fire team who got 16 votes. The result won’t stop me from participating in the next Webcup 2015.”

All five participants in the Seychelles first Webcup are currently working in the IT field.

Blue Fire’s Chang Yunn is a content developer and a senior executive at VCS group, Monnaie and Lebon both web developers and Mangroo a graphic designer, all three working for Switch, a marketing agency within the VCS group of Companies.

SRV’s Jean Francois Rose is an IT manager at MAIA Resort, a hotel in the Western part of Mahe, main island of the archipelago.

The same competition was being held in 5 other Indian Ocean island nations namely Reunion, Mauritius, Madagascar, Mayotte and the Comoros, which according to the organisers saw a total of 82 participants divided into 52 teams across the six island nations.

The Webcup is an annual competition initiated by the Webcup association of Reunion Island in 2010, designed for anyone with an interest in ICT be it amateurs, students or professionals who can participate as individuals or teams of not more than 4 members.

The French overseas department in the Indian Ocean, came up with this fun and educational event to promote Information and Communication technology (ICT).

Seychelles and the Comoros decided to join the fun this year.

At the end of this first experience the Managing Director of VCS Gilbert Lebon told SNA he was generally satisfied with the output from both teams.

“It has been a fantastic and exciting experience seeing the two participating teams working all night non-stop till for 24 hours! Especially the way they could overcome sleepiness and the good work load organization amongst them,” he said.

“Even though one team had to be a one-man-show after his two other team members failed to turn up…I am satisfied with both websites they built.”

With regards to the number of participants in general Lebon expressed some disappointment.

“Many showed interest in the competition but did not confirm their participation. However, I am positive and feel honoured that we could realize the first Webcup in the Seychelles which met the required standards. I believe that this is a stepping stone which we will later build on with better marketing,” said Lebon who confirmed that from now on the Webcup is going to be an annual event in Seychelles.

“It will be held during April or May every year. We are not only looking for participation of professionals in the field, but also amateurs, university students amongst others working in the IT industry. As this is a chance for them to challenge themselves. I therefore call upon all mentioned to participate next year.”

The Blue Fire team from the Seychelles now has another challenge as they will be joining the winning teams from the 5 other participating Indian Ocean island nations to battle in the finals which will be held from October 11-12, in Mauritius.

“The local team which will be heading to Mauritius for the finals should see this as an experience rather than competition. It will be an opportunity for them to discover the standards, skills and level of technology that the neighbouring islands have. This shall serve as good knowledge for their participation.” Said Lebon.

The Blue Fire team is already looking forward to the challenge.

“It’s not often that one can represent their country in such events and we are proud to do so. We are looking into giving a better show than this one in the grand finale in Mauritius, " said the team this afternoon.