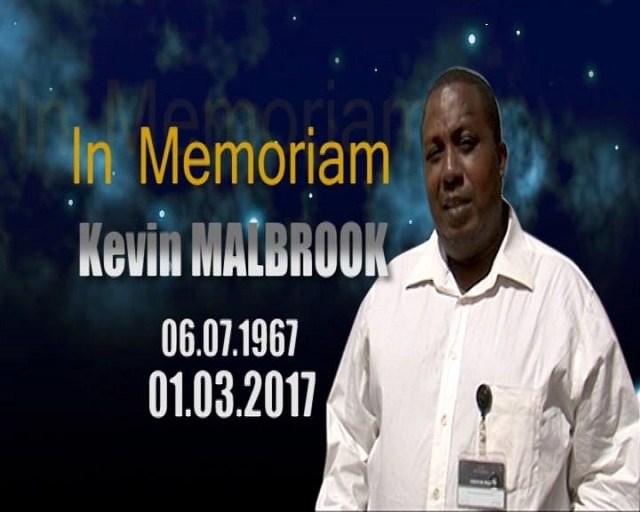 Kevin Malbrook -- a devoted journalist who was not afraid to address sensitive and sometimes controversial subjects. (Seychelles Broadcasting Corporation)

(Seychelles News Agency) - The acclaimed Seychellois journalist and television presenter Kevin Malbrook was laid to rest on Friday at the parish of Ste. Marie Madeleine at Takamaka, a district in the south of Mahe.

The media community in the island nation was shocked Wednesday with the announcement of the death of Malbrook. The 49-year old who was ill for sometime, died at the Seychelles Hospital. Members of the public have been expressing their sadness via social media.

In a message to the family, friends and colleagues, the Seychelles’ President Danny Faure described Malbrook as “a journalist of quality and a defender of the freedom of expression.”

Faure said, “It was a pleasure to answer questions from a journalist who did not hesitate or afraid to address sensitive subjects and sometimes controversial where he showed his passion for investigative journalism.”

Malbrook was a journalist and presenter with the Seychelles Broadcasting Corporation (SBC) for the past 22 years. He joined the SBC in May 1995 when he returned to Seychelles after having lived in Greece.

He was well known for his questions on controversial and sensitive issues and has often put officials in the line of fire. Malbrook had a special passion for news related to the judiciary and was seen as the SBC’s correspondent for court cases.

He will be greatly missed by the media community in Seychelles, an archipelago in the western Indian Ocean.